Skip to main content
Alasdair MacIntyre, George Lindbeck, and the Nature of Tradition - eBook
By: David Trenery
Stock No: WW111441EB 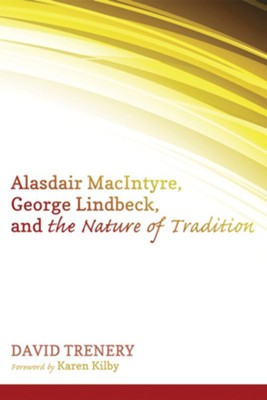 Alasdair MacIntyre, George Lindbeck, and the Nature of Tradition - eBook

▼▲
What should we believe, and why should we believe it? This book addresses these questions through a critical exposition of the work of the contemporary philosopher Alasdair MacIntyre and of the theologian George Lindbeck, the father of postliberal theology. The book argues that MacIntyre's philosophical development can be seen as a response to the question of how belief in a comprehensive metaphysical system can be justified. Such a system provides its believers with an account of the nature of the universe and human nature, and a basis for their ethical reasoning and action. The book draws on Lindbeck's cultural-linguistic account of religion to argue that such a system is primarily a way of interpreting the world and the place of humanity within it, rather than a speculative theory. The justification of belief in such systems can be understood in terms of MacIntyre's account of tradition-constituted rationality, provided that this notion of rationality is made more specific by the incorporation of elements of Lindbeck's theology. Equally, the book argues that Lindbeck's theology can be strengthened by the incorporation of elements drawn from MacIntyre's work. This book will be of value to students of philosophy and theology and to the general reader who is interested in the question of the grounds of belief.

▼▲
David Trenery is an Associate Lecturer at the Open University, United Kingdom. After a successful career in social work and social services management, he returned to his earlier study of philosophy and religion and was awarded a PhD at the University of Nottingham in 2013. He is now combining his expertise in philosophy and social work by working on the relationship between MacIntyrean virtue ethics and social work practice.

▼▲
I'm the author/artist and I want to review Alasdair MacIntyre, George Lindbeck, and the Nature of Tradition - eBook.
Back
Back