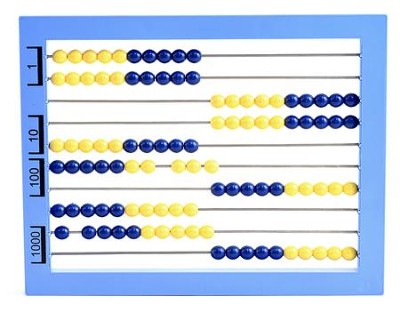 ▼▲
The core manipulative in the RightStart Mathematics program, this AL Abacus features beads grouped in 5s and 10s to encourage quantity recognition and visualization. On one side the child performs basic operations and learns strategies for mastering the facts. On the reverse side, trading is emphasized. This 9-3/4" x 7-1/2" (24.75 cm x 19.25 cm). Made in the USA.

In Christianity: The Biography Ian Shaw charts the story of Christianity from its birth and infancy among a handful of followers of Jesus Christ, through its years of development into a global religious movement, spanning continents and cultures and transcending educational and social backgrounds.

This new, accessible overview of the global history of Christianity:

Ian J. Shaw is Associate International Director of the Langham Scholars Program and Honorary Fellow, School of Divinity, New College, University of Edinburgh. He is the author of Churches, Revolutions and Empires: 1789-1914; High Calvinists in Action: Calvinism and the City; William Gadsby; and The Greatest Is Charity.

Christians today have largely lost their historical memory, and it is no surprise that as a result many are struggling to agree on the right way ahead for the church. Ian Shaw's remarkable book, encompassing in one volume the entire chronological and geographical range of Christian history, will prove invaluable in helping Christians to recover their historical memory and hence to find wisdom for the future. -- Brian Stanley, Professor of World Christianity, University of Edinburgh

Believers need to know the story of their own faith, and Christianity: The Biography is a great place to start. It covers fascinating figures, movements and trends across two millennia without ever getting bogged down or side-tracked. It is not only clear and accessible, but also inspiring and wise. -- Timothy Larsen, McManis Professor of Christian Thought, Wheaton College

The more we learn about Christianity's global reach, the more urgent is the need to re-frame how we understand Christian history. This book gets it right. It offers fascinating accounts of Christianity entering the ancient civilizations of Persia, India and China and its transformation of Ethiopia, Egypt and the Sudan -- even while it was reaching the wild tribes of the remote British Isles. We learn too about the rise of Islam, the modern missions movement and the rapid worldwide spread of Pentecostalism. In sum, this text is a lively treatment of a truly global faith. -- Professor Joel Carpenter, Nagel Institute for the Study of World Christianity, Calvin College, Grand Rapids

So-called 'histories of the church' are often essentially histories only of the church in the West. It is a joy to meet one that recognizes that 'world Christianity' began in the early centuries, and that the story of the Christian faith is a six-continent one. It is a joy also to find it so helpful and well written -- Professor Andrew F. Walls, University of Edinburgh, Liverpool Hope University and Akrofi-Christaller Institute, Ghana

▼▲
I'm the author/artist and I want to review AL Abacus Standard.
Back