AirQuest Adventures #1: Crash at Cannibal Valley
By: Jerry B. Jenkins 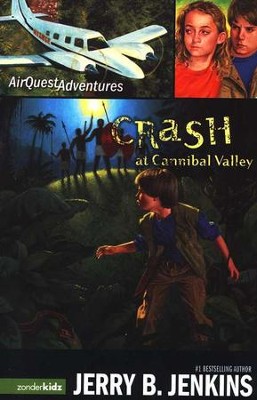 ▼▲
Bestselling author Jerry Jenkins keeps kids (and adults) on the edge of their seats in the AirQuest series, which follows the adventures of a bush pilot dedicated to helping missionaries. Travel the world with twelve-year-old Chad Michaels, his younger sister, Kate, and their risk-taking entrepreneur dad as the three go globe-trotting to help those in need--and land in more trouble than they ever imagined! Recommended for ages 8 to 12.

Crash at Cannibal Valley finds the AirQuest team in a perilous dilemma. Their plane has gone down in Indonesia, and Chad must help his injured sister and his dad survive in an area rumored to be inhabited by cannibals.

Join Chad and his family as they face grave challenges and exciting adventure in Crash at Cannibal Valley, book 1 in the AirQuest Adventures series!

When their plane goes down in Indonesia, Chad must help his injured sister and his dad survive in an area rumored to be inhabited by cannibals, in Crash at Cannibal Valley. Faced with screaming and attacking warriors and danger and mystery all around, and without even time to say a quick prayer, Chad must be strong!

Jerry B. Jenkins is the author of more than 180 books, including the 63,000,000-selling Left Behind series. His non-fiction books include many as-told-to autobiographies, including those of Hank Aaron, Bill Gaither, Orel Hershiser, Luis Palau, Walter Payton, Meadowlark Lemon, Nolan Ryan, and Mike Singletary. Jenkins also assisted Dr. Billy Graham with his memoirs, Just As I Am. He also owns the Jerry Jenkins Writers Guild, which aims to train tomorrow’s professional Christian writers.

▼▲
I'm the author/artist and I want to review AirQuest Adventures #1: Crash at Cannibal Valley.
Back
×
Back
×