Agreeable Agreement: An Examination of the Quest for Consensus in Ecumenical Dialogue
By: Minna Hietamki 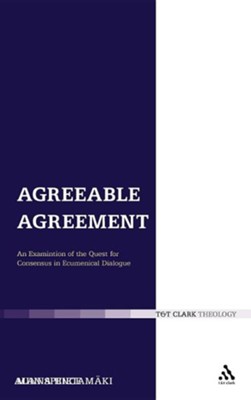 Agreeable Agreement: An Examination of the Quest for Consensus in Ecumenical Dialogue

In recent bilateral ecumenical dialogue the aim of the dialogue has been to reach some form of doctrinal consensus. The three major chapters of the book discuss the variety of forms of doctrinal consensus found in ecumenical dialogues among Anglicans, Lutherans and Roman Catholics. In general, the dialogue documents argue for agreement/consensus based on commonality or compatibility.

Each of the three dialogue processes has specific characteristics and formulates its argument in a unique way. The Lutheran-Roman Catholic dialogue has a particular interest in hermeneutical questions and proposes various forms of "differentiated" or perspectival forms of consensus. The Anglican-Roman Catholic dialogue emphasises the correctness of interpretations. The documents consciously look towards a "common future", not the separated past.

▼▲
I'm the author/artist and I want to review Agreeable Agreement: An Examination of the Quest for Consensus in Ecumenical Dialogue.
Back
×