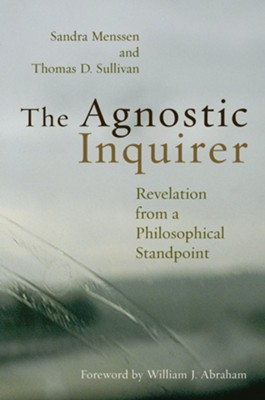 The Agnostic Inquirer: Revelation from a Philosophical Standpoint

▼▲
Is there a good God? If so, what do we know about him? Answering the first question before the second often leads to an inadequate response to evil's existence. Defending revelatory materials, Menssen and Sullivan contend that philosophers who ignore God's voice in stories, myths, legal codes, and exhortations work with a woefully impoverished database. 336 pages, softcover from Eerdmans.

▼▲
Is there a good God? And if there is, has that God revealed anything of significance to us? Philosophers pondering these two questions have automatically assumed that the first must be answered before the second. But Sandra Menssen and Thomas Sullivan argue philosophically -- that is, without reliance on divine revelation -- that unless the content of revelatory claims has been considered, it is a mistake to deny the existence of God.

The Agnostic Inquirer presents a clear, analytical argument that without reflection on the content of revelatory claims, atheists and agnostics are missing a large part of the relevant database for establishing the existence of God, and many theists are working with an impoverished database in trying to explain the foundations of their faith.

▼▲
Sandra Menssen is professor of philosophy at University ofSt. Thomas, St. Paul, Minnesota.
William J. Abraham (1947–2021) was Professor Emeritus of Wesley Studies at Perkins School of Theology, Southern Methodist University, and the inaugural director of the Wesley House of Studies at George W. Truett Theological Seminary, Baylor University. His books include The Logic of Evangelism and The Logic of Renewal, and Among the Ashes: On Death, Grief, and Hope.

▼▲
William J. Abraham (from the foreword)
— Southern Methodist University
"A startling achievement. . . I cannot overemphasize how original and groundbreaking this work is, or recommend this book too highly. The argument throughout is clear, succinct, and rigorous. It represents the highest standards of analytical philosophy. All future work, if it is to be up to speed, will have to deal with what Menssen and Sullivan have done."

William Hasker
— Huntington University
"Sandra Menssen and Thomas Sullivan, both sometime agnostics, have constructed an apologetic with an eye to their former selves and to the many others who are in a similar situation. Their most important proposal is that an agnostic ought to consider the question Has a good God revealed anything to us? early in the process of inquiry, rather than waiting until the task of natural theology has been completed. This proposal is defended and its implications worked out with care and thoroughness. Recommended for philosophically minded agnostics and for nonagnostics who have occasion to reason with them."

Kevin Flannery, S.J.
— Pontifical Gregorian University
"This is a very, very good book. It has strengthened my Faith."

Jorge J. E. Gracia
— State University of New York
"This book takes an entirely different line from what is standard in philosophy of religion and theology circles in the defense of revelatory claims. According to Menssen and Sullivan, believers need not try to convince nonbelievers of the existence of a good God as a preamble to the discussion of his revelation. Rather, they need only show that it is not highly unlikely that there is a creator. This is very significant.
'Both authors are converts. The issues posed by the book and the argument it presents are more than mere academic matters to them; in many ways they are existentially relevant. The fact that they are converts to Christianity, however, should not be an obstacle to readers of other faiths, for the argument they present is not parochial to Christianity. They cast a wide net."

▼▲
I'm the author/artist and I want to review The Agnostic Inquirer: Revelation from a Philosophical Standpoint.
Back
Back