Skip to main content
Agnostic at the Altar
By: John Van Hagen
Stock No: WW675805 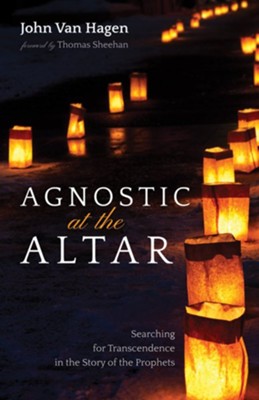 Agnostic at the Altar

In Agnostic at the Altar, former Catholic priest and psychologist John Van Hagen engages the voices of the ancient Jewish prophets in an effort to find something of a universal voice that speaks to all people. He builds upon the work of Scripture scholars, religious writers, and his own experiences to pave a path by which readers can engage in religion, while at the same time defending against harmful religious claims and practices.

The prophets, who first appeared in Palestine in the Axial Age, translated their experience of the transcendent into magnificent stories that began with a time of intimacy with their God, a later time of betrayal and turmoil, and a future reconciliation at the end of time. Later, Christians adopted these themes as their own.

Their stories emphasize justice and right worship as a way toward a meaningful and peaceful future. Their insights into a spiritual dimension of reality brought purpose to millions of lives. In this uncertain time of increasing global tension and strife, they could do the same for us. Agnostic at the Altar makes a compelling case that the ancient prescriptions for a just way of living together are not only historically significant, but in perfect keeping with an evolutionary-based desire that all people live in harmony.

▼▲
I'm the author/artist and I want to review Agnostic at the Altar.
Back