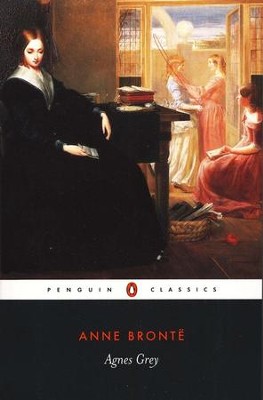 ▼▲
Drawing on her own experiences, Anne Bronte wrote her first novel out of an urgent need to inform her contemporries about the desperate position of unmarried, educated women driven to take up the only "respectable" career open to them--that of a governess. Struggling with the monstrous Bloomfield children and then disdained in the superior Murray household, Agnes tells a story that is at once a compelling inside view of Victorian chauvinism and ruthless materialism and, according to George Moore, "the most perfect prose narrative in English literature."

▼▲
‘The name of governess, I soon found, was a mere mockery … my pupils had no more notion of obedience than a wild, unbroken colt’

When her family becomes impoverished after a disastrous financial speculation, Agnes Grey determines to find work as a governess in order to contribute to their meagre income and assert her independence. But Agnes’s enthusiasm is swiftly extinguished as she struggles first with the unmanageable Bloomfield children and then with the painful disdain of the haughty Murray family; the only kindness she receives comes from Mr Weston, the sober young curate. Drawing on her own experience, Anne Brontë’s first novel offers a compelling personal perspective on the desperate position of unmarried, educated women for whom becoming a governess was the only respectable career open in Victorian society.

This edition also includes Charlotte Brontë’s memoir of her sisters, theBiographical Notice of Ellis and Acton Bell. Angeline Goreau examines Anne Brontë’s complex relationship with her sisters and her unhappy career as a governess as influences in writing Agnes Grey.

▼▲
Anne Bront&euml;, who was born in 1820, was brought up in the Yorkshire village of Haworth where her father was curate. She was educated at home and, as a child, she invented with her sister Emily the imaginary world of Gondal, for which she wrote copious chronicles and poems. She held two positions as governess, with the Inghams at Blake Hall and, from 1840-45, with the Robinson family at Thorp Green. As a religious lyric poet, Anne Bront&euml;’s hymns and lyrics rank with those of Cowper. Her first novel Agnes Grey (1847), published under the pseudonym Acton Bell, is in the tradition of fictional spiritual autobiography, written with conciseness, integrity and irony. The Tenant of Wildfell Hall (1848) is a powerful feminist testament, attacking the marriage laws, double standards of sexual morality and the education of men and women. Anne Bront&euml; died at Scarborough in 1849. She was the youngest of the Bront&euml; sisters, whose extraordinary gifts are only now receiving just appraisal.

▼▲
“The one story in English literature in which style, characters and subject are in perfect keeping.” —George Moore

▼▲
I'm the author/artist and I want to review Agnes Grey.
Back
Back