Skip to main content
Aging Starts in Your Mind: You're Only As Old As You Feel
By: Notker Wolf
Stock No: WW618142 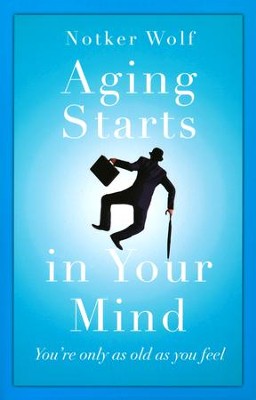 Aging Starts in Your Mind: You're Only As Old As You Feel

In Aging Starts in Your Mind, Notker Wolf takes a lighthearted, refreshing approach to life that any reader will find delightful! Each of his anecdotes and stories has a nugget of wisdom that will resonate especially with anyone who has struggled against the outward signs of aging. As Wolf says, the soul doesn’t age; it’s timeless and measures itself by a different standard than the body.

If we focused on the state of our soul—a soul which is resolutely vibrant, cheerful, and full of zest for life—we wouldn’t resist aging at all. We would speak of growing fulfillment and joy. A wonderful collection of food for thought on a topic that each of us will face in the second half of life!

▼▲
Notker Wolf OSB was the Abbot Primate of the Benedictine Confederation of the Order of Saint Benedict worldwide until the end of his final term in 2016. He is also a musician, playing both sacred music and electric guitar. He received an honorary Doctor of Laws degree from Saint Anselm College and is active in interfaith dialogue. He currently resides in Rome, Italy.

▼▲
Notker Wolf, OSB, with Leo Linder. Aging Starts in Your Mind, translated by Gerlinde B&Uuml;chinger-Schmid. Paraclete Press, Brewster, Mass., 2017. 205 pp., $17.99, ISBN 978-1-61261-814-2. Perhaps influenced by his own recent retirement, the always insightful and entertaining former abbot primate offers his thoughts on growing old. He does not sugar-coat the realities, giving vivid descriptions of such things as the last day of work and the time when the excitement and novelty of it wears off, leaving boredom and a sense of invisibility. The book is filled with commentaries on homey incidents in chapters with intriguing titles like "Greetings from Pink Floyd" or "My Hairdresser and Pope Francis." The latter, for example, leads into a reflection on these two, a barber and the head of the Church, as two special models of humility in his life. It is no surprise that the consistent message is acceptance of the reality of aging, and responding to it with initiative, enthusiasm and prayerful hope in the ultimate fulfillment of our life of faith. Altough the book should provide inspiration to those in their later years, it is never too soon to start reading such good advice from a person who is clearly aging well. —American Monastic Newsletter

▼▲
I'm the author/artist and I want to review Aging Starts in Your Mind: You're Only As Old As You Feel.
Back
Back