Aggie the Brave
By: Lori Ries 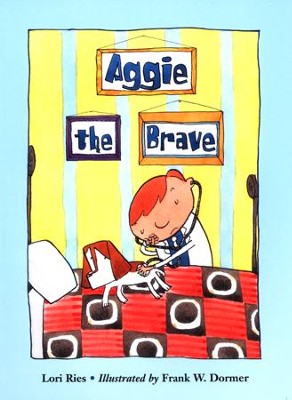 By: Lori Ries
More in Aggie and Ben Series
Charlesbridge / Paperback
Write a Review
Expected to ship on or about 08/01/20.
Stock No: WW916366

▼▲
Aggie has to go to the vet to get spayed, but she is very scared---she hides and tries to run. But she must be brave---join Ben and his dog Aggie as they both must deal with their separation anxiety.

▼▲
Aggie and Ben are back with another boy-and-his-dog adventure just right for early and beginning readers.

They met and became best friends in Aggie and Ben. They learned to behave in Good Dog, Aggie. Now Aggie and Ben must conquer their fears in their third book for beginning readers. Puppy, Aggie, has to go to the vet, but it's Ben who needs to be brave as he deals with a night without his best friend. When Aggie returns home, she is unable to play. Ben must do his best to take care of her and make her feel better.

Frank W. Dormer's expressive illustrations tell the story of the special bond between a boy and his loyal pet dog. Young readers will love the continuing adventures of Aggie and Ben.

▼▲
Lori Ries was born in Syracuse, New York, the eldest of four children. She discovered a love for storytelling as a young child and wrote her first story when she was just ten years old. It was a short story called "Jo-Jo the Raccoon" based on a true story about a baby raccoon that Lori's grandfather found on the side of the road and brought home for his children to raise. Lori lives in Tigard, Oregon, with her husband and three children.

▼▲
I'm the author/artist and I want to review Aggie the Brave.
Back
×
Back
×