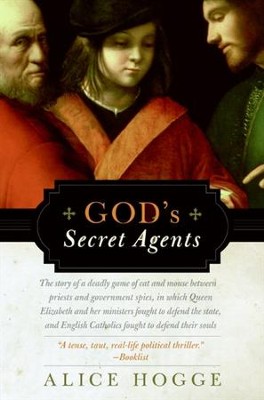 Alice Hogge was educated at the University of St. Andrews, Scotland. She lives in London. This is her first book.

“Hogge’s absorbing narrative of the experience of [Catholic] underground life reads like a historical novel.” — The Guardian

“An exciting account of the Catholic resistance in England under Elizabeth.” — New Statesman

“A well-researched, skillfully crafted book that evokes the physical as well as the intellectual world of Renaissance English Catholicism.” — Weekly Standard

“[A] vivid and moving portrait of the Counterreformation in the Elizabethan age.” — The Spectator

“Paints a vivid picture of the stresses of operating in secret, under false identities, in constant fear of betrayal.” — London Times

▼▲
I'm the author/artist and I want to review God's Secret Agents: Queen Elizabeth's Forbidden Priests and the Hatching of the Gunpowder Plot - eBook.
Back
Back