Skip to main content
SPRING CYBER EVENT STARTS NOW: And it's a really BIG deal! Up to 88% off through 5/24>
The Gay Agenda: It's Dividing The Family, The Church, and a Nation - eBook
By: Ronnie W. Floyd
Stock No: WW19801EB 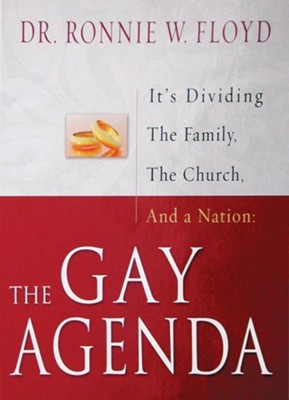 The Gay Agenda: It's Dividing The Family, The Church, and a Nation - eBook

For over 17 years Dr. Ronnie Floyd has been leading thousands to Jesus Christ through his Invitation to Life ministry in northwest Arkansas. As senior pastor of First Baptist Church of Springdale, Arkansas and pastor of the Church at Pinnacle Hills in Rogers, Arkansas – churches with a combined attendance of 15,000 – Dr. Floyd also reaches homes across the nation and beyond with his dynamic and powerful message of hope, obedience to Christ, and love televised on WGN Superstation, FamilyNet Television, Sky Angel, the Church Channel and on Direct TV. Each day his ministry can be seen internationally through his television ministry, Winners. He is a gifted communicator, leader, pastor and author of 18 books. He is a featured speaker in various conventions and conferences across America, as well as the visionary founder and major leader of The Summit Business Persons Luncheon in northwest Arkansas that reaches hundreds of leaders weekly. Pastor Floyd and his wife, Jeana, will be married for 30 years in December of 2006. They have two sons, two daughters-in-law and one grandchild. Jeana, Josh, Nick, Kate, Meredith and grandson Peyton serve as his richest treasure on this earth other than his relationship with Jesus Christ.

▼▲
I'm the author/artist and I want to review The Gay Agenda: It's Dividing The Family, The Church, and a Nation - eBook.
Back
Back