Skip to main content
SPRING CYBER EVENT STARTS NOW: And it's a really BIG deal! Up to 88% off through 5/24>
The Age of Turbulence: Adventures in a New World - eBook
By: Alan Greenspan
Stock No: WW47481EB 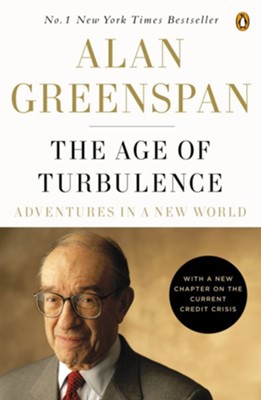 The Age of Turbulence: Adventures in a New World - eBook

The Age Of Turbulence is Alan Greenspan’s incomparable reckoning with the contemporary financial world, channeled through his own experiences working in the command room of the global economy longer and with greater effect than any other single living figure. Following the arc of his remarkable life’s journey through his more than eighteen-year tenure as chairman of the Federal Reserve Board to the present, in the second half of The Age of Turbulence Dr. Greenspan embarks on a magnificent tour d’horizon of the global economy. The distillation of a life’s worth of wisdom and insight into an elegant expression of a coherent worldview, The Age of Turbulence will stand as Alan Greenspan’s personal and intellectual legacy.

▼▲
Alan Greenspan was born in 1926 and reared in the Washington Heights neighborhood of New York City. After studying the clarinet at Juilliard and working as a professional musician, he earned his B.A., M.A., and Ph.D. in economics from New York University. In 1954, he cofounded the economic consulting firm Townsend-Greenspan & Co. From 1974 to 1977, he served as chair of the Council of Economic Advisors under President Gerald Ford. In 1987, President Ronald Reagan appointed him chairman of the Federal Reserve Board, a position he held until his retirement in 2006. He is the author of the number one New York Times bestseller The Age of Turbulence.

▼▲
I'm the author/artist and I want to review The Age of Turbulence: Adventures in a New World - eBook.
Back
Back