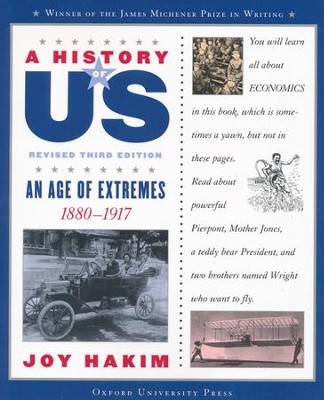 By: Joy Hakim
More in A History of the US Series
Oxford University Press / 2007 / Paperback
Write a Review
In Stock
Stock No: WW327229

▼▲
American history isn't a history of good vs. evil, but a richly nuanced texture interwoven with the fascinating, interesting lives of thousands of people.

A History of US volume 8 covers "An Age of Extremes," 1880-1917. A fascinating age, Hakim masterfully covers the wide disparity between the rich and the poor, the native-born and the immigrant; children will learn about monopolies, labor (Haymarket & the Bread and Roses March), Unions, Muckrakers, John Muir, Conservation, Teddy Roosevelt, Taft, and other elements of life at the turn of the 19th century.

Joy Hakim has excited millions of young minds with the great drama of American history in her award-winning series A History of US. An exciting, thought-provoking narrative, Hakim's series brings American history to life through occasional first-person comments, riveting biographical information, and a focused coverage that will keep kids reading.

▼▲
Recommended by the Common Core State Standards for English Language Arts and Literacy as an exemplary informational text.

For the captains of industry men like Andrew Carnegie, John D. Rockefeller, J. P. Morgan, and Henry Ford the Gilded Age is a time of big money. Technology boomed with the invention of trains, telephones, electric lights, harvesters, vacuum cleaners, and more. But for millions of immigrant workers, it is a time of big struggles, with adults and children alike working 12 to 14 hours a day under extreme, dangerous conditions. The disparity between the rich and the poor was dismaying, which prompted some people to action. In An Age of Extremes, you'll meet Mother Jones, Ida Tarbell, Big Bill Haywood, Sam Gompers, and other movers and shakers, and get swept up in the enthusiasm of Teddy Roosevelt. You'll also watch the United States take its greatest role on the world stage since the Revolution, as it enters the bloody battlefields of Europe in World War I.
About the Series:
Master storyteller Joy Hakim has excited millions of young minds with the great drama of American history in her award-winning series A History of US. Recommended by the Common Core State Standards for English Language Arts and Literacy as an exemplary informational text, A History of US weaves together exciting stories that bring American history to life. Hailed by reviewers, historians, educators, and parents for its exciting, thought-provoking narrative, the books have been recognized as a break-through tool in teaching history and critical reading skills to young people. In ten books that span from Prehistory to the 21st century, young people will never think of American history as boring again.

▼▲
Joy Hakim, a former teacher, editor, and writer won the prestigious James Michener Prize for her series, A History of US, which has sold over 4 million copies nationwide. A graduate of Smith College and Goucher College she spent years teaching students from elementary school up to the college level. She also served as an Associate Editor at Norfolk's Virginian-Pilot, and was an Assistant Editor at McGraw-Hill's World News.

▼▲
"[An] exciting series... Ms. Hakim braids multiple narratives together to bring alive material long dead to children's imaginations."--The New York Times Book Review
"Joy Hakim didn't rewrite history. But she did make it a whole lot more fun to read."--Education Week
"Readers young and old will find themselves amused, amazed, and engrossed by this searching, opinionated survey. In every sense a fresh look at our history." --Kirkus Reviews
"Merits every accolade, starting with the most personal: I couldn't put it down."--Washington Post Book World
"The liveliest, most realistic, most well-received American history series ever written for children."--Los Angeles Times
"A thorough and accurate narrative of our nation's history."--The Philadelphia Inquirer
"I think this is the best American history written for young people that I have ever seen."--David Herbert Donald, Harvard University; Pulitzer prize-winning author of Lincoln
"When master storyteller Joy Hakim wields her pen, you're in for a breathtaking adventure."--Teaching K-8
"An attention to detail and drama alike make these recommended choices for not only readers ages 8-13 but for entire families."--Children's Bookwatch
"Absorbing, real and even fun to read."--Voice of Youth Advocates
"Books of real substance that speak directly to kids."--Jean Fritz, author of Shhh, We're Writing the Constitution
"One of the best nonfiction series of the decade. Impossible to put down."--School Library Journal