Skip to main content
Us Against the World: Our Secrets to a Long and Loving Marriage - eBook
Stock No: WW94829EB 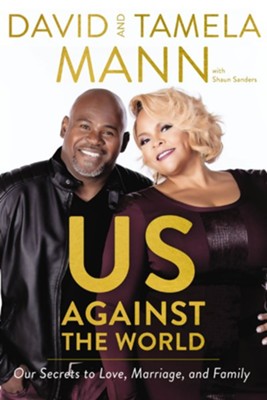 Us Against the World: Our Secrets to a Long and Loving Marriage - eBook

In Us Against the World, David and Tamela Mann share their secrets to a love, marriage, and family. Wonderfully inspiring and funny, this up-close look at their lives and the lessons they've learned during their 30-year marriage will help couples realize what including Jesus in their marriage truly means.

David and Tamela Mann have been married for 30 years, but the singers, actors, and entrepreneurs are just as, if not more than, happily in love as they were in the early days of their relationship. In their new book, the couple will relate the story of their first encounters as teenagers, the importance of communication, and how they’ve been able to keep that spark burning through all these years.

The Mann's have delighted and inspired audiences through music, a string of plays and movies, as well as several television series—Meet the Browns, The Mann's, and Mann & Wife. They’ll share about their often hilarious and sometimes controversial interactions with each other, their blended family of five grown children and eight grandchildren, and how these relationships enrich their lives. Given their recording careers, touring, filming, and managing an outrageous family, The Mann's will share with readers the day-to-day challenges, successes, and joys that happen behind the scenes.

David and Tamela Mann are a dynamic husband-and-wife duo that have become household names across television and movie screens, on stage, and on the radio. David is an ingeniously funny and extraordinarily talented actor/comedian, screen writer, and director. His partner in life and business is Grammy Award–winning superstar Tamela Mann. Audiences have come to know and love David and Tamela via Kirk Franklin and the Family and Tyler Perry film and television productions. They are known for bringing good, old-fashioned family values, laughter, and music to whatever they do. David, Tamela, and their blended family of five adult kids and ten grandkids live in Dallas, Texas.

▼▲
'Our dear friends David and Tamela Mann have made us laugh, dance, and sing. They have also taught us how to love unconditionally. Their thirty-year marriage is a testament that love, family, and commitment still exist. Their new book, Us Against the World, is filled with wisdom on sustaining everlasting love. Everyone needs to read this book!' --Devon Franklin and Meagan Good, producers and authors of the New York Times bestseller The Wait

▼▲
I'm the author/artist and I want to review Us Against the World: Our Secrets to a Long and Loving Marriage - eBook.
Back
Back