Skip to main content
Against the Tide: The Valor of Margaret Wilson
By: Hope Irvin Marston
Stock No: WW380615 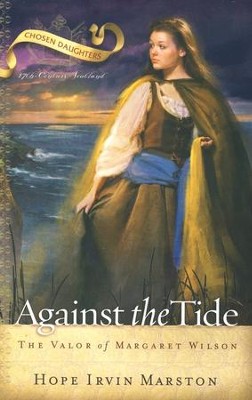 Against the Tide: The Valor of Margaret Wilson

▼▲
Scotland in the 17th century is a place of cruel intolerance for Covenanters, who are people bound together by their loyal faith. Margaret Wilson, a young Covenanter and stalwart for the faith, finds her loyalty to Christ in direct opposition to King Charles II's demand for her absolute allegiance. Eventually, she is apprehended by the King's forces, and faces a tough decision: Will she choose to defy the authorities or will her love for her family and hopes for the future rule her heart? Recommended for ages 8 to 12.

▼▲
Margaret, a young Covenanter and a stalwart in the faith, is apprehended by the king’s forces. When she refuses to recant, she is tied to a stake at low tide and drowned.

▼▲
Hope Irvin Marston is a retired junior-high school librarian and the author of more than two dozen childrens books, including the My Little Book series of animal stories and the award-winning Isaac Johnson: From Slave to Stonecutter. Picture books, photographic essays, and junior biography are her forte.

▼▲
Against the Tide by Hope Marston is about Margaret Wilson, a 17th century Scottish girl who struggles to remain true to her faith despite King Charles IIs orders for complete submissiveness to him as a deity. Margaret must deal with conflicting loyalties between her family, king, and God.

The book is laid out in a clear, chronological format, although it is slowly paced as it goes through the difficulties of Margarets teenage life. A whos who in the story table is helpful in sorting out the characters one encounters. Margarets relationship with Christ is strongly portrayed, as is her closeness to her family. The interaction between Margaret and her sweetheart is weakly done, however. The pace of the book quickens as it nears the end, with Margarets capture, trial, and threatened execution.

King Charles II proclaims that he is the head of the church, and that it is illegal to believe that Jesus is the Head. Those who believe so are called Covenanters and are marked for persecution. Margaret tries to decide what is right-- following the king of England or following the King of her heart. She eventually decides to go live with the hill folk, who are other Covenanters who refuse to do as King Charles orders. She and her siblings who go with her get caught, and her family is punished. Her siblings are set free, but Margaret is sentenced to execution for treason.

Margaret is a girl who wants to do whats right and is willing to stand up for what she believes in. Margaret doesnt seem to change or grow as the book progresses; her faith is just as strong in the end of the book as it was in the beginning. The difficulties her family and the other Scots face just get worse. The other characters in the book are flatly drawn, and there is little differentiation between Margarets brothers and their friends.

Against the Tide would be best suited for teenaged girls who like historical fiction. It was a story with a strong heroine, but less than strong storytelling. -- Jessica Becker, Christian Book Previews.com

▼▲
"I love a story brimming with genuine conflict, and Against the Tide more than delivers. Margaret Wilson is a heroine for the ages, holding true to her convictions during one of the darkest seasons in Scottish history. Set in Galloway, the corner of the Lowlands nearest to my heart, Hope Marston's tale of courage rings vibrantly true to time and place. Oh, that we might all have the faith of this young woman, who was determined to let God choose her future, whether for service or for sacrifice." -- Liz Curtis Higgs, best-selling author

IAgainst the Tide is an excellent novel based on the real experiences of Margaret Wilson, a young woman who was willing to suffer death for her faith in seventeenth century Scotland. It was a time when Covenanters faced death, torture or banishment for disagreeing with King Charles II, and thousands of Scots suffered martyrdom at this time for their adherence to Jesus Christ as head of the church. Set in south-west Scotland against such a backdrop, this book is true to the times. The story builds up to a dramatic conclusion, one that grasps the reader’s attention at the same time as the dragoons close in on the heroine. -- Dane Love, is the author of Scottish Covenanter Stories and is the Honorary Secretary of the Scottish Covenanter Memorials Association, a charity that exists to preserve the graves and monuments of the Covenanters.

Set in its true historical context Hope Marston deals masterfully with the anguish and heart searching of a devout young woman, torn first by loyalty to parents, family, friends and a lawful king; love for her sweetheart, then the very personal question—who was King of her conscience ? She found her truth in King Jesus, for whom she freely gave her life in the waters of the Solway Firth. -- Brian Orr

The difficult age of the Scottish Covenanters comes startlingly to life in Against the Tide. Hope Marston has captured all the drama and adventure, tension and intrigue, courage and romance, faith and endurance of those Killing Times when both the integrity of the Gospel and the prospects of freedom were very much at stake. She has spun for us a noble and memorable yarn." -- George Grant, Pastor, Parish Presbyterian Church, Founder, King's Meadow Study Center, President, Franklin Classical School

▼▲
I'm the author/artist and I want to review Against the Tide: The Valor of Margaret Wilson.
Back
Back