We are OPEN and SHIPPING - click here for shipping estimates
Against the Tide: The Radical Leadership of Pope Francis
By: John Allen 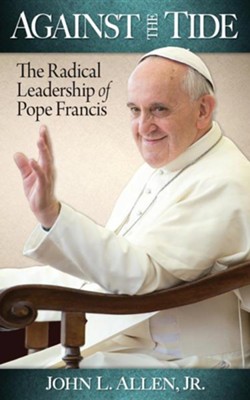 Against the Tide: The Radical Leadership of Pope Francis

Pope Francis has fascinated the world with his humility, his compassion, and his radical vision for the Church. While he has embraced modest living, his leadership of the Catholic Church has been anything but quiet as he has begun to change the way the world views the Church. But Pope Francis doesn’t just want to get people talking — he wants to get people moving.

He has welcomed the homeless into the Vatican, embraced people with diseases, and shaken a complacent hierarchy. Shepherds, he said, should acquire the smell of the sheep. In short, as he has urged young people to do, he swims against the tide.

John L. Allen, Jr., is the senior Vatican Analyst for CNN and the editor of Crux, a Catholic-oriented news website. In Against the Tide, which he wrote as senior Vatican correspondent for the National Catholic Reporter, Allen reveals a pope who has fixed his sight on reform, on accountability, and on the Church’s Social Gospel. Allen shows how the pope’s actions reach out to those who are disinterested, disenfranchised and lost — and how his leadership, while beginning a new era, has roots that stretch back 2000 years.

▼▲
John L. Allen, Jr. established the Rome office of the National Catholic Reporter in 2000 and continues to break the leading stories of the Vatican. Currently, Allen is an associate editor at The Boston Globe covering up-to-date Catholic news. Additionally, Allen is the senior Vatican analyst for CNN and author of several bestselling books including 10 Things Pope Francis Wants You to Know.

▼▲
I'm the author/artist and I want to review Against the Tide: The Radical Leadership of Pope Francis.
Back
×