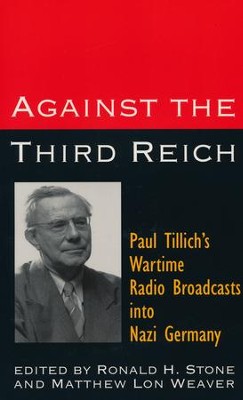 ▼▲
Paul Tillich, one of the most influential theologians of the 20th Century, wrote more than 100 radio addresses that were broadcast into Nazi Germany from March 1942 through May 1944.

The broadcasts-through Voice of America-were passionate and political pleas for Germans to recognize the horror of Hitler and to reject a morally and spiritually bankrupt government. Largely unknown in the United States, the broadcasts have been translated into English for the first time, and approximately half of them are presented in Against the Third Reich

German speaking listeners heard Tillich's keen observations on anti-Semitism, the liberation of Europe, resistance to Hitler, and the meaning of Christian faith to war-torn Europe. Tillich urged the defeat of oppressive governments, the securing of the welfare of the people of Europe, and the federation of Europe-goals that remain unfulfilled at the end of the 20th Century.

Far from being Allied propaganda, these addresses show that Tillich, who had served with German forces during WWI, was a shrewd military analyst who foresaw the inevitable defeat of Germany-and who tried to prepare the people of his homeland for their eventual liberation from Nazi tyranny.

Paul Tillich, one of the greatest Protestant theologians of modern times, wrote more than one hundred radio addresses that were braodcast into Nazi Germany from March 1942 through May 1944. The broadcasts were passionate and political--urging Germans to recognize the horror of Hitler and to reject a morally and spiritually bankrupt government. Laregly unknown in the United States, the broadcasts have been translated into English for the first time, and approximately half of them are presented in this book.

▼▲
Paul Tillich (1886-1965), a renowned theologian, taught at several universities in Germany before moving to the United States. In the United States, he taught at Union Theological Seminary in New York, Harvard Divinity School, and the University of Chicago. He is best known for his major three-volume work, Systematic Theology.

▼▲
I'm the author/artist and I want to review Against the Third Reich: Paul Tillich's Wartime Radio.
Back
Back