Skip to main content
SPRING CYBER EVENT STARTS NOW: And it's a really BIG deal! Up to 88% off through 5/24>
The Case Against Q: Studies in Markan Priority and Synoptic Problem
By: Mark Goodacre
Stock No: WW83347 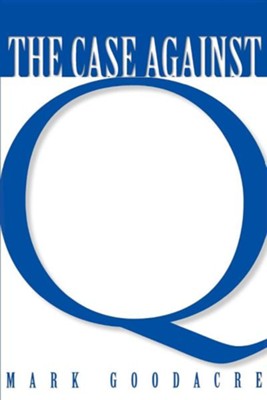 The Case Against Q: Studies in Markan Priority and Synoptic Problem

▼▲
Q is a hypothetical entity, part of the standard solution to the Synoptic Problem - the study of the inter-relationship of Matthew, Mark and Luke. This solution supposes that Matthew and Luke made independent use not only of Mark but also another source - now lost - called "Q". Belief in its existence is commonplace, but there have always been doubters. Mark Goodacre is one of them. In The Case Against Q, Goodacre presents a careful, balanced and detailed critque of the Q hypothesis, examining the most important arguments of Q's proponents. He offers new arguments and fresh reflections, creating a more plausible picture of Synoptic relationships than has ever been available.

▼▲
For over a century Gospel scholarship has accepted a hypothetical document called Q as one of the major sources of the Synoptic Gospels. In recent times, it has even been transformed from a sayings source to a Gospel in its own right. But, says Mark Goodacre in The Case Against Q, the majority acceptance of Q cannot function as an argument for its existence. From time to time dissenting voices have spoken against such widespread acceptance of Q as a Gospel. Scholars have pointed out, for instance, that Luke's knowledge of Matthew and Mark would enable one to dispense with Q. Yet, such voices often have gone unheeded due to the lack of a clear, balanced, and scholarly treatment of the case against Q. So, in The Case Against Q Goodacre offers a careful and detailed critique of the Q hypothesis, examining the most important arguments of Q's proponents. He then offers new arguments and fresh reflections reaffirming Markan Priority as the key to successful Synoptic scholarship. With this book, Goodacre provides a more plausible picture of Synoptic relationships than has previously been available, as he reconstructs Synoptic interrelationships and Christian origins. Mark Goodacre is Lecturer in New Testament in the Department of Theology at the University of Birmingham (England) and the author of The Synoptic Problem: A Way Through the Maze.

No, this is not a print on demand book.

▼▲
I'm the author/artist and I want to review The Case Against Q: Studies in Markan Priority and Synoptic Problem.
Back