Skip to main content
Faith Against the Odds: A Memoir of My Journey from Mississippi to the Ivy League and Beyond
By: Gladys January Willis
Stock No: WW822563 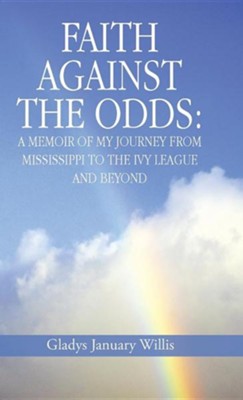 Faith Against the Odds: A Memoir of My Journey from Mississippi to the Ivy League and Beyond

This book presents the story of Gladys January Willis-from early childhood to retirement as a university professor and administrator. It chronicles her experiences as a Black girl born and reared in Jackson, Mississippi, as well as her educational sojourn in college and graduate schools, and a career in higher education and entrance into Christian ministry as an ordained chaplain. In Chapter IX of the book, Willis writes:

It is no secret that in my racist and segregated community the majority-White system promoted its message loudly and clearly-on the public buses, in the segregated school system, in employment practices, in segregated eateries, in housing developments, in business transactions, and in the political arena. One of the most impacting experiences in my life, after the passage of the 1964 Civil Rights Act, was that of exercising my right to vote. Because of the cherished right to vote as an American citizen, whenever there is an election, exercising my right to vote is a top priority. I am sure that my Black home environment played a vital role in the way I came to think about life in general and my own life in particular.

She credits her maternal grandmother, Henrietta Young Hedrick, as her primary role model. Mama, as she was called, "was a proud Black woman who demanded that she be respected. Her boldness was undaunted and communicated her respect for herself and her demand for the same from others, regardless of who they were or their station in life."

▼▲
I'm the author/artist and I want to review Faith Against the Odds: A Memoir of My Journey from Mississippi to the Ivy League and Beyond.
Back