Skip to main content
Against Julian
Translated By: Matthew A. Schumacher C.S.C.
By: St. Augustine
Stock No: WW214009 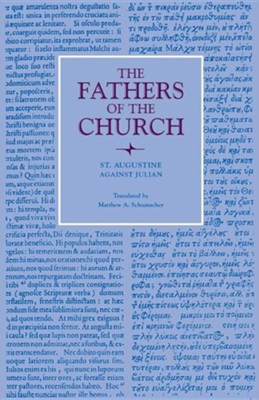 Translated By: Matthew A. Schumacher C.S.C.
By: St. Augustine
More in Fathers of the Church Patristic Series
Catholic University of America Press / 1957 / Paperback
Write a Review
In Stock
Stock No: WW214009
Buy Item Our Price$45.00
In Stock
Quantity:
Stock No: WW214009
Catholic University of America Press / 1957 / Paperback
Quantity:
Add To Cart
of These in Your Cart

▼▲
The Julian mentioned in the title is Julian of Eclanum who was born at Eclanum in Italy in 380 and died in Sicily ca. 455. After the death of his wife, Julian joined the clergy of his native diocese and eventually succeeded his father as bishop. With a mastery of Greek and Latin Julian combined a great store of theological learning which, however, was tainted with Pelagian errors. Because of his support of Pelagius Julian himself was condemned, deposed and expelled from Italy. In his authentic work, four books to Turbantius, three letters, and eight books to Florus, Julian's heterodox teachings reduced grace to a simple, protective, divine assistance and practically denied that the taint of Adam's sin passed on to the human race. In Against Julian Augustine stresses in the first two books the traditional teachings of the Church found in the Fathers and contrasts their teaching with the rationalism of the Pelagians. Thereupon he refutes the error of the Pelagians that grace is given according to merits. To refute the Pelagian error concerning concupiscence Augustine explains the Pauline teaching ""that each one may know how to possess his vessel."" In the concluding book we find a detailed explanation of the practice of infant baptism. This section is a valuable witness to the ritual of baptism as it was conferred in the age of the Fathers.

▼▲
I'm the author/artist and I want to review Against Julian.
Back