Skip to main content
SPRING CYBER EVENT STARTS NOW: And it's a really BIG deal! Up to 88% off through 5/24>
The Case Against Israel's Enemies: Exposing Jimmy Carter and Others Who Stand in the Way of Peace
By: Alan Dershowitz
Stock No: WW490051 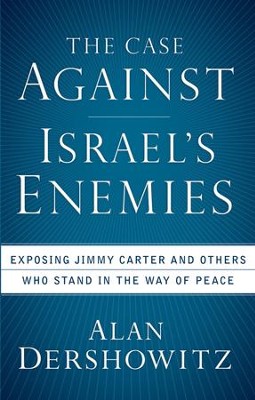 The Case Against Israel's Enemies: Exposing Jimmy Carter and Others Who Stand in the Way of Peace

In addition to Hamas, which provoked the recent war and Gaza with its rocket attacks on Israeli civilians, Alan Dershowtiz argues that Israel's most dangerous enemies include Jimmy Carter and other western leaders who would delegitimize Israel as an apartheid regime subject to the same fate as white South Africans; Israel's academic enemies, led by professors Stephen Walt and John Mearsheimer, who would accuse supporters of Israel of dual loyalty and indeed disloyalty to America; and Iran, led by Mahmoud Ahmadinejad, which threatens Israel by its development of nuclear weapons, which it has publicly threatened to use against the Jewish state.

Alan Dershowitz is at his outspoken, thought-provoking best in The Case Against Israel's Enemies, changing both the tone and the focus of the debate about Israel's adversaries at a time when the future existence of Israel is increasingly imperiled.

▼▲
Alan Dershowitz, the Felix Frankfurter Professor of Law at Harvard Law School, is one of the country's foremost appellate lawyers and a distinguished defender of individual liberties. His many books include the New York Times bestsellers Chutzpah and The Case for Israel. He lives in Cambridge, Massachusetts.

▼▲
I'm the author/artist and I want to review The Case Against Israel's Enemies: Exposing Jimmy Carter and Others Who Stand in the Way of Peace.
Back