Skip to main content
Against Atheism: Why Dawkins, Hitchens, and Harris Are Fundamentally Wrong - eBook
By: Ian S. Markham
Stock No: WW22467EB 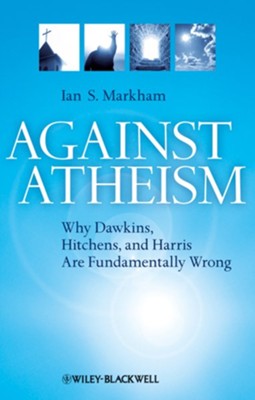 Against Atheism: Why Dawkins, Hitchens, and Harris Are Fundamentally Wrong - eBook

▼▲
In this new book, Ian Markham analyzes the atheistic world view, opposing the arguments given by renowned authors of books on atheism, such as Richard Dawkins. Unlike other responses to the new atheism, Markham challenges these authors on their own ground by questioning their understanding of belief and of atheism itself. The result is a transforming introduction to Christianity that will appeal to anyone interested in this debate.

▼▲
Ian S. Markham is the Dean and President of Virginia Theological Seminary and Professor of Theology and Ethics. He is the author of numerous books, including: Encountering Religion (2000), A Theology of Engagement (2003), Do Morals Matter? (2006), Understanding Christian Doctrine (2007), A World Religions Reader, 3rd edn (2009), and the 2-volume reference work, The Blackwell Companion to the Theologians (2009), all published by Wiley-Blackwell.

“It is a thoughtful, eirenic and wide-ranging contribution … This is a serious and sophisticated addition to the burgeoning New Atheism literature, and a very good advert for its author’s avowed ‘classical Catholicism in its Anglican form’ (p.8).”  (Modern Believing, 1 July 2012)

"Markham encourages people of faith to listen to the challenging critiques of atheists and to engage them for much of value ‘can be learned', shared, and clarified in a respectful exchange of ideas (p. 134). Religious and non-religious people wanting to learn more about atheism, a religious response to atheism, and the connections between science and religion should read this book." (Religion & Theology, 2012)

"Unlike other responses to the new atheism, Markham challenges these authors on their own ground by questioning their understanding of belief and of atheism itself.  The result is a transforming introduction to Christianity that will appeal to anyone interested in this debate." (Studies in Spirituality, 2010)"In addition, this book details fairly well (albeit briefly) with some sensitive topics: homosexuality, Islam, religious extremism. . . still, there is much to commend about Against Atheism, and it surely deserves a wide readership." (Theological Book Review, 2010)

"Markham's apologetic infuses contemporary science with classical philosophy, up-to date theological scholarship, and a pastoral sensitivity to mental, emotional and physical anguish that any life of faith necessarily confronts. ...helpful for its seriousness yet conciseness and accessibility...clear signposts and summaries for alert readers to follow and discern their own spiritual rootedness. Markham is consistent in his approach ... . For its clarity, precision and wit, the book is certainly accessible." (Christian Scholar's Review, October 2010)

"Of the many current contra-atheism books suddenly on the market, Markham's is helpful for its seriousness yet conciseness and accessibility." (Christian Scholar's Review, October 2010).

"Accessible and patient ... .Markham does not evade tough questions." (The Tablet, April 2010)

"Markham's comparison of Nietzsche to the New Atheists is particularly insightful … .This book will be enjoyed by academically minded believers looking to bolster their arguments against atheism." (Library Journal, April 2010)

"Stands out from the crowd by questioning the theological, ethical, and spiritual content underpinning books by Dawkins, Hitchens, and Harris. By challenging the very foundations of their position, [Markham] exposes the weaknesses in their arguments." (Sourcews, November 2009)

▼▲
I'm the author/artist and I want to review Against Atheism: Why Dawkins, Hitchens, and Harris Are Fundamentally Wrong - eBook.
Back
Back