Skip to main content
Us Against Alzheimer's: Stories of Family, Love, and Faith
By: Marita Golden
Stock No: WW924146 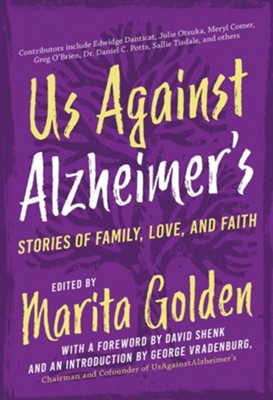 Us Against Alzheimer's: Stories of Family, Love, and Faith

▼▲
"Moving and illuminating&hellip;.It is through stories like these that we begin to understand people living with Alzheimer's, and maybe—through empathy and compassion—we can heal what can't yet be cured."—Lisa Genova,, author, New York Times bestselling Still Alice

This groundbreaking multicultural anthology shares moving personal stories about the impacts of Alzheimer’s and dementia.

An estimated 5.7 million Americans are afflicted by Alzheimer’s disease, including 10 percent of those over sixty-five, and it is the sixth leading cause of death. But its effects are more pervasive: for the nearly 6 million sufferers, there are more than 16 million family caregivers and many more family members. Alzheimer’s wreaks havoc not only on brain cells; it is a disease of the spirit and heart for those who suffer from it but also for their families.

This groundbreaking anthology presents forty narratives, both nonfiction and fiction, that together capture the impact and complexity of Alzheimer’s and other dementias on patients as well as their caregivers and family. Deeply personal, recounting the wrenching course of a disease that kills a loved one twice—first they forget who they are, and then the body succumbs—these stories also show how witnessing the disease and caring for someone with it can be powerfully transformative, calling forth amazing strength and grace.
The contributors, who have all generously donated their work, include Edwidge Danticat, Julie Otsuka, Elizabeth Nunez, Meryl Comer, Greg O’Brien, Dr. Daniel Potts, Sallie Tisdale, and Nihal Satyadev. Reflecting the diversity and global nature of the dementia crisis, this anthology is published in collaboration with UsAgainstAlzheimer’s.

▼▲
Marita Golden is the award-winning author of sixteen works of fiction and nonfiction, including The Wide Circumference of Love, a 2017 NPR Best Book and 2018 NAACP Image Award nominee, published by Arcade and now being adapted for TV by Just A Rebel Productions. She is the cofounder and president emeritus of the Hurston/Wright Foundation and a veteran teacher of writing. She has served as a member of the faculties of the MFA graduate creative writing programs at George Mason University and Virginia Commonwealth University and in the MA creative writing program at John Hopkins University, and has taught writing internationally to a variety of constituencies. A longtime resident of Washington, DC, she currently lives in Mitchellville, Maryland.

George Vradenburg is chairman of UsAgainstAlzheimer’s, which he cofounded in October 2010. He was named by US Health and Human Services Secretary Kathleen Sebelius to serve on the Advisory Council on Research, Care, and Services established by the National Alzheimer's Project Act and has testified before Congress about the global Alzheimer’s pandemic. He is a member of the World Dementia Council. He and UsAgainstAlzheimer's co-convene both the Leaders Engaged on Alzheimer's Disease (LEAD) Coalition and the Global CEO Initiative on Alzheimer's Disease. With his wife Trish (1946–2017), George has long been a dedicated member of Washington's civic and philanthropic community. George served as chairman of The Phillips Collection for thirteen years and is a member of the Council on Foreign Relations and the Economic Club of Washington. He has served in senior executive and legal positions at CBS, FOX and AOL/Time Warner. George and Trish published TikkunMagazine for ten years.

David Shenk is the bestselling author of six books, including The Genius in All of Us, The Forgetting, Data Smog, and The Immortal Game. He is cohost of the public radio podcast The Forgetting and  creator of the Living with Alzheimer’s Film Project, and has contributed to National Geographic, the New York Times, the Wall Street Journal, Nature Biotechnology, Harper's, The New Yorker, the Atlantic, the New Republic, NPR, BBC, and PBS. Shenk lives in Brooklyn, NY, and Southfield, MA.

▼▲
"The stories in this anthology are moving and illuminating. I believe in the power of story to educate and demystify, to demolish fear and shame, to generate conversation and connectedness. To humanize. It is through stories like these that we begin to understand people living with Alzheimer's, and maybe—through empathy and compassion—we can heal what can't yet be cured."
—Lisa Genova, New York Times–bestselling author of Still Alice

"Alzheimer's can be isolating and terrifying, but when we share powerful stories like these, we begin to tear down the walls that keep it in the shadows. The powerful voices in this book shine a light full of humanity, heart, and healing to a disease that has affected so many."
—Lauren and Seth Rogen, Founders of Hilarity For Charity

"This anthology is terrific. It is the perfect read for those who have or have had the Alzheimer’s experience. The stories are heartfelt and real, and will make a difference in the lives of many. Another excellent piece of work from Marita Golden!"
—Goldie S. Byrd. Alzheimer's Researcher and Director, Maya Angelou Center for Health Equity, Wake Forest School of Medicine

"Here is what's so beautiful about this book: It is chock full of people sticking their necks out and telling their story. With clarity, with patience, with feeling, with faith."
—David Shenk, cohost of the podcast The Forgetting: Inside the Mind of Alzheimer's, author of The Forgetting, and creator of  the Living with Alzheimer’s Film Project

"Having lost a great grandfather to Alzheimer’s, I cannot stress enough the importance of a committed exploration of the disease. If this book were only shining light on Alzheimer’s, it would be enough but it’s more than that. It’s the fine, fine writing, full of story and beautiful language and inventiveness and wisdom. Up against Alzheimer’s is an essential read."—Mitchell S. Jackson author of Survival Math

"A powerful collection of stories. Each one made me feel less alone against this horrible battle."—Urban Book Reviews

▼▲
I'm the author/artist and I want to review Us Against Alzheimer's: Stories of Family, Love, and Faith.
Back