We are OPEN and SHIPPING - click here for shipping estimates
PRE-SUMMER CYBER SALE EXTENDED thru 6/1 ~ Over 2,500 items up to 90% off
Trump Aftershock: The President's Seismic Impact on Faith and Culture in America
By: Stephen E. Strang 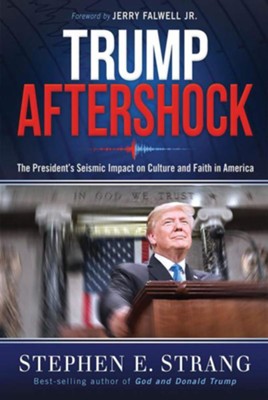 Trump Aftershock: The President's Seismic Impact on Faith and Culture in America

The election of Donald Trump sent shock waves around the world. His agenda - to make America great again - focused on strengthening the economy, restoring federal courts, addressing illegal immigration, rebuilding the military, and uplifting America's standing in the world. Strang explores the results of the aftershock - including the reactions of conservative and Christian voters; international responses; and the economy. 336 pages, hardcover from Frontline.

▼▲
Foreword by Jerry Falwell Jr
This book will cut through the media noise and reveal what the media won’t cover while objectively helping you understand what our nation’s most unlikely and unconventional president has accomplished.
If Donald Trump’s election was an earthquake, his accomplishments since then are the aftershocks the world never saw coming.


The Trump agenda, promoted daily to millions of voters is helping to "make America great again." At the same time, the opposition’s agenda is to obstruct and ultimately impeach Donald Trump.

▼▲
Stephen E. Strang is the best-selling author of God and DonaldTrump, whichwas brandished by the president during his appearance at Davos World Economic Forum in 2017.  The CEO and founder of Charisma Media, Strang was voted by Time magazine as one of the most influential evangelicals in America. He has traveled to more than fifty countries, interviewed four US presidents, and has been featured on Fox News, CNN, MSNBC, CBN, Family Talk With Dr. Dobson, and The DailyCaller.com.

▼▲
Stephen Strang’s new book about President Trump is an eye-opener. The part about George Soros and his nefarious operation is riveting. Stephen shows that he is indeed an accomplished reporter who gets to the heart of the issue. I commend Stephen’s latest book, Trump Aftershock, as a must-read at a time when we are being barraged by false news from the so-called shadow government.
—Dr. M. G. "Pat" Robertson, Founder/Chairman, The Christian Broadcasting Network Inc.
Host, The 700 Club

If I wrote a theme song for the Left that captured their frenzied behavior over the last two years, I would definitely title it "Trump Derangement Syndrome." From special counsels with bogus cases built on an unverified "dossier" to social media censorship of conservative voices to liberal bullies who attack administration members—including my own daughter—in public, no one is immune to the tension. Americans feel like watching the news has become a front-row seat to the battle for our nation’s very soul. Among the mainstream media very little credit is given to the president for his accomplishments and his unwavering stand for conservative values and freedoms, but this important book you hold in your hands sets the record straight about President Trump and provides insights into the spiritual aspects of Trump’s presidency as well. I wrote the foreword for Stephen Strang’s last book, God and Donald Trump, and now I wholeheartedly endorse his new book, Trump Aftershock, and encourage you to read it.
—Mike Huckabee, New York Times Best-Selling Author
Host, Huckabee on TBN

On a recent cruise to Alaska, a woman sitting at my table bragged about Stephen Strang’s previous book, God and Donald Trump, to the lady across the table. Not knowing that I knew Stephen and had also published my latest book with his company, she went on and on. "It’s a must-read," she said. "I couldn’t put it down!" It made me proud to know Stephen and be interviewed by him for his follow-up book, which you now hold in your hands. Trump Aftershock masterfully reveals why Donald Trump’s earth-shattering presidency matters—because it is about so much more than Donald Trump; it’s a fight to preserve the Judeo-Christian values and freedoms of our great nation for the next generation. If you care about the future of our country, you need to read this book.
—Brigitte Gabriel, New York Times Best-Selling Author
Founder, ACT for America

When my friend Stephen Strang wrote his previous book, God and Donald Trump, I couldn’t wait to have him on my television show to talk about it because I feared that too many people believed the lies in the mainstream media, and I wanted to help people understand the truth about Donald Trump. That’s why I’m so glad Stephen has written this new book, Trump Aftershock, because the media’s misrepresentation of our president and his agenda has only gotten worse since his election. Stephen’s book is one of the only books I know that sets the record straight from a Christian perspective. Trump Aftershock is a must-read for politically minded Christians who take religious freedoms and values seriously, who believe we finally have someone in the Oval Office who supports those values, and who are praying that these events will cause our great nation to return to God.
—Jim Bakker, Christian Television Pioneer
Host, The Jim Bakker Show

Stephen Strang has had his hand on the pulse beat of America for decades as a distinguished journalist and publisher. In his new book he deftly documents the powerful impact President Trump has had on the nation’s culture. The question is, What happens next? And Stephen delivers a hard-hitting look at where the nation is headed.
—Todd Starnes, Fox News Channel
Brooklyn, New York

In the 1960s the United States suffered an aftershock when three Ks were assassinated: John F. Kennedy, Robert Kennedy, and Martin Luther King. Afterward the country experienced rebellion—the "God is dead" movement, the drug and sexual revolution, Roe v. Wade, and other signs of moral decay. The country then came face to face with another "aftershock" when, contrary to liberal opinion polls, Donald Trump was elected president. Stephen Strang has written a fantastic book that captures the impact of Trump’s extraordinary presidency on our nation and the world, and I encourage you to read it.
—Mike Evans, New York Times Best-Selling Author
Friends of Zion Heritage Center, Jerusalem

▼▲
I'm the author/artist and I want to review Trump Aftershock: The President's Seismic Impact on Faith and Culture in America.
Back
×
Back
×