Skip to main content
Aftermath: Seven Secrets of Wealth Preservation in the Coming Chaos
By: James Rickards
Stock No: WW216958 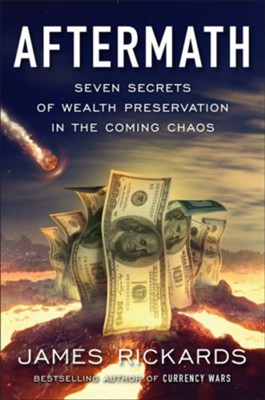 Aftermath: Seven Secrets of Wealth Preservation in the Coming Chaos

Financial expert, investment advisor and New York Times bestselling author James Rickards shows why and how global financial markets are being artificially inflated--and what smart investors can do to protect their assets

What goes up, must come down. As any student of financial history knows, the dizzying heights of the stock market can't continue indefinitely--especially since asset prices have been artificially inflated by investor optimism around the Trump administration, ruinously low interest rates, and the infiltration of behavioral economics into our financial lives. The elites are prepared, but what's the average investor to do?

James Rickards, the author of the prescient books Currency Wars, The Death of Money, and The Road to Ruin, lays out the true risks to our financial system, and offers invaluable advice on how best to weather the storm. You'll learn, for instance:

How behavioral economists prop up the market: Funds that administer 401(k)s use all kinds of tricks to make you invest more, inflating asset prices to unsustainable levels.
Why digital currencies like Bitcoin and Ethereum are best avoided.
Why passive investing has been overhyped: The average investor has been scolded into passively managed index funds. But active investors will soon have a big advantage.
What the financial landscape will look like after the next crisis: it will not be an apocalypse, but it will be radically different. Those who forsee this landscape can prepare now to preserve wealth.

Provocative, stirring, and full of counterintuitive advice, Aftermath is the book every smart investor will want to get their hands on--as soon as possible.

▼▲
James Rickards is the Editor of Strategic Intelligence a financial newsletter. He is The New York Times bestselling author of The New Great Depression (2020), Aftermath (2019), The Road to Ruin (2016), The New Case for Gold (2016), The Death of Money (2014), and Currency Wars (2011) from Penguin Random House. He is an investment advisor, lawyer, inventor, and economist, and has held senior positions at Citibank, Long-Term Capital Management, and Caxton Associates. In 1998, he was the principal negotiator of the rescue of LTCM sponsored by the Federal Reserve. His clients include institutional investors and government directorates. He is an op-ed contributor to the Financial Times, Evening Standard, The Telegraph, New York Times, and Washington Post, and has been interviewed by BBC, CNN, NPR, CSPAN, CNBC, Bloomberg, Fox, and The Wall Street Journal. Mr. Rickards is a guest lecturer in globalization and finance at The Johns Hopkins University, Georgetown University, Trinity College Dublin, The Kellogg School at Northwestern, the U.S. Army War College and the School of Advanced International Studies. He has presented papers on risk at Singularity University, the Applied Physics Laboratory, and the Los Alamos National Laboratory. He is an advisor on capital markets to the U.S. intelligence community, and the Office of the Secretary of Defense, and is on the Advisory Board of the FDD Center on Economic and Financial Power in Washington DC. Mr. Rickards holds an LL.M. (Taxation) from the NYU School of Law; a J.D. from the University of Pennsylvania Law School; an M.A. in international economics from SAIS, and a B.A. (with honors) from Johns Hopkins. He lives in New Hampshire.

▼▲
"The discussion of why the US middle classes are under pressure, the case for universal basic income and similar ideas is one of the best I have read: humane, lucid and relevant. Rickards has gone and done it again."—Wealth Briefing Asia

▼▲
I'm the author/artist and I want to review Aftermath: Seven Secrets of Wealth Preservation in the Coming Chaos.
Back