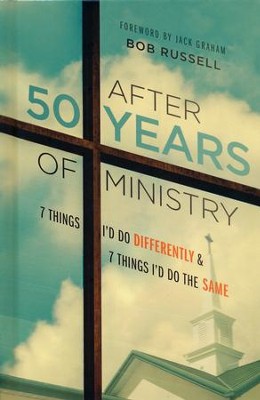 ▼▲
It's wise to learn from those who have gone before. Sit down with After 50 Years of Ministry and let Bob Russell share what he has learned from his decades of ministry and leadership. Discover how to respond to inevitable criticism, top comparing yourself to other pastors, prioritize preaching, take care of yourself, protect your own marriage, and more.

Learn Ministry from One of the Best

When Bob Russell became the pastor of Southeast Christian Church, it was just 120 people meeting in a basement. When he retired forty years later, it was nearing 20,000.

Though Bob's ministry was a clear success, he'd be the first to say it wasn’t perfect. In After 50 Years of Ministry he shares why. He reflects on the best of what he’s learned—sometimes the hard way—about ministry and leadership, like how to:

Hilarious, warm, and full of great stories and illustrations, After 50 Years of Ministry is sage advice from a faithful servant of God. If you are in leadership of any kind, don’t miss this chance to learn from one of the best.

▼▲
BOB RUSSELL At just twenty-two years of age, Bob became the pastor of Southeast Christian Church. That small congregation of 120 members became one of the largest churches in America, with 18,000 people attending the four worship services every weekend in 2006 when Bob retired. Now through Bob Russell Ministries, Bob continues to preach at churches and conferences throughout the United States, provide guidance for church leadership, mentor other ministers and author Bible study videos for use in small groups. An accomplished author, Bob has written over one-dozen books.Bob and his wife Judy of 50 years have two married sons, Rusty and Phil. In his leisure time he enjoys playing golf and is an avid University of Louisville football and basketball fan.

JACK GRAHAM pastors one of America's largest churches, Prestonwood Baptist Church, near Dallas, Texas. He is a noted author of numerous books, including Lessons from the Heart, A Hope and a Future, You Can Make a Difference, Life According to Jesus, and Courageous Parenting, co-authored by his wife, Deb, and based on their experiences as parents. His most recent book, Are You Fit for Life?, was released in January 2008 by Crossway Books. Jack and Deb live in Frisco, Texas and have three children.

"This should be required reading for every seminarian who intends to pastor. An inspiring and thoughtful review of the best and worst of ministry. Easy to read but deep and insightful."