We are OPEN and SHIPPING - click here for shipping estimates
After Ten Years: Dietrich Bonhoeffer and Our Times
By: Victoria J. Barnett 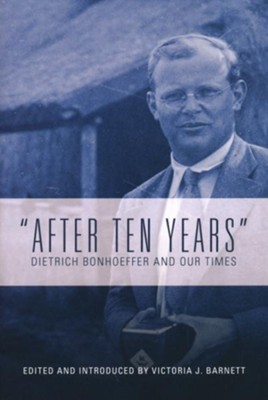 After Ten Years: Dietrich Bonhoeffer and Our Times

How does one read the signs of the time? What does it mean to resist? Dietrich Bonhoeffer has achieved iconic status as one who epitomizes both what it means to struggle and resist tyranny and fascism and how one acts in faithful witness as a religious and political commitment. The complexity of Bonhoeffer’s witness and example is more relevant than ever. A testimony to that is a crucial essay penned by Bonhoeffer in 1942; “After Ten Years” is a succinct and sober reflection and remains one of the best descriptions ever written about what happened to the German people under National Socialism. Victoria J. Barnett presents this timely and unique essay with a penetrating introduction and analysis of its importance—in Bonhoeffer’s time and now in our time.

Victoria J. Barnett served from 2004-2014 as one of the general editors of the Dietrich Bonhoeffer Works, the English translation series of Bonhoeffer’s complete works published by Fortress Press.  She has lectured and written extensively about the Holocaust, particularly about the role of the German churches. Her published works include Bystanders: Conscience and Complicity during the Holocaust (1999) and For the Soul of the People: Protestant Protest against Hitler (1992). Since 2004 she has directed the Programs on Ethics, Religion, and the Holocaust at the United States Holocaust Memorial Museum. She is a graduate of Indiana University, Union Theological Seminary, New York, and George Mason University.

▼▲
I'm the author/artist and I want to review After Ten Years: Dietrich Bonhoeffer and Our Times.
Back
×
Back
×