Skip to main content
After Thermopylae: The Oath of Plataea and the End of the Graeco-Persian Wars
By: Paul Cartledge
Stock No: WW747320 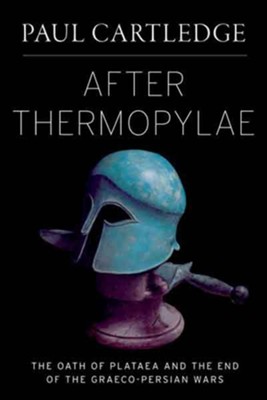 After Thermopylae: The Oath of Plataea and the End of the Graeco-Persian Wars

▼▲
The Battle of Plataea in 479 BCE is one of world history's unjustly neglected events. It decisively ended the threat of a Persian conquest of Greece. It involved tens of thousands of combatants, including the largest number of Greeks ever brought together in a common cause. For the Spartans,
the driving force behind the Greek victory, the battle was sweet vengeance for their defeat at Thermopylae the year before. Why has this pivotal battle been so overlooked?

In After Thermopylae, Paul Cartledge masterfully reopens one of the great puzzles of ancient Greece to discover, as much as possible, what happened on the field of battle and, just as important, what happened to its memory. Part of the answer to these questions, Cartledge argues, can be found in a
little-known oath reputedly sworn by the leaders of Athens, Sparta, and several other Greek city-states prior to the battle-the Oath of Plataea. Through an analysis of this oath, Cartledge provides a wealth of insight into ancient Greek culture. He shows, for example, that when the Athenians and
Spartans were not fighting the Persians they were fighting themselves, including a propaganda war for control of the memory of Greece's defeat of the Persians. This helps explain why today we readily remember the Athenian-led victories at Marathon and Salamis but not Sparta's victory at Plataea.
Indeed, the Oath illuminates Greek anxieties over historical memory and over the Athens-Sparta rivalry, which would erupt fifty years after Plataea in the Peloponnesian War. In addition, because the Oath was ultimately a religious document, Cartledge also uses it to highlight the profound role of
religion and myth in ancient Greek life. With compelling and eye-opening detective work, After Thermopylae provides a long-overdue history of the Battle of Plataea and a rich portrait of the Greek ethos during one of the most critical periods in ancient history.

▼▲
Paul Cartledge is the inaugural A.G. Leventis Professor of Greek Culture in the Faculty of Classics, University of Cambridge, and recently the Hellenic Parliament Global Distinguished Professor in the History and Theory of Democracy at New York University. His previous books include Ancient Greece:
A Very Short Introduction, Thermopylae: The Battle That Changed the World, and The Spartans: The World of the Warrior-Heroes of Ancient Greece. He is an honorary citizen of modern Sparta and holds the Gold Cross of the Order of Honor awarded by the President of Greece.

▼▲
"Well-written, and comprehensive scholarship that we have come to expect from Paul Cartledge. His endeavour has produced a carefully and well-researched book, which stands as an important contribution not only to ancient Greek warfare but also to the larger issues of reception and cultural memory."
--Bryn Mawr Classical Review
"Filled with rich detail, interesting etymologies, and wonderful contrasts, this work is a reminder that history (as readers are reminded, a term initiated by Herodotus, meaning 'enquiry') is subject to interpretation, manipulation, and exploitation. ... Well argued, thoughtful, and accessible, this
will be welcomed by any generalist interested in the Persian Wars and their social, political, and religious context." --Library Journal
"A superb account of the Persian wars and their aftermath, easily the best that I have yet encountered in so small a volume." --Peter Jones, BBC History magazine
"A thoughtful and engaging starting-point for anyone interested not only in the Graeco-Persian Wars, but also in the way future generations use the memory of war." --Military History Monthly
"A quick, engaging, and enjoyable read... an important addition to our understanding of the Graeco-Persian Wars and the cultural ethos of the ancient Greeks. For those interested in the Graeco-Persian Wars and how the Greeks came to understand their own history, it is a book well worth the read."
--Nikolaus Overtoom, H-War
"Cartledge, in his latest work, has extricated the battle from where it has languished as 'unheralded,' and elevated it to a position in which it is firmly entrenched in the pantheon of the other celebrated Greek battles... This is an excellent work for anyone interested in the history of the Greeks
or in historical memory." --Strategy Page
"After Thermopylae is a historical detective story, unraveling the mysteries of the Oath of Plataea, one of the most famous but least understood documents in Greek history. Paul Cartledge tears away the veil of myths that the Greeks wove around their great victory over the Persians at Plataea to
expose a fascinating, unsuspected story of ancient culture wars. Essential reading for anyone interested in the politics of the past." --Ian Morris, author of Why the West Rules--For Now
"As a student of the Battle of Salamis, I was fascinated by this account, by a distinguished historian, of the Battle of Plataea and its afterlife. Like today, ancient Greece had its culture wars-and memory wars." --Barry Strauss, author of The Spartacus War and The Battle of Salamis
"The solemn oath which the Athenians are said to have sworn as they prepared to fight the Persians at the Battle of Plataea is one of the most interesting documents to survive from classical antiquity. "IAfter Thermopylae vividly explores the remarkable story of the battle -- a more significant
turning point in history than the famous clashes that preceded it -- and its afterlife. This fascinating material deserves to be much better known, and no one is better than Paul Cartledge at making ancient history accessible to a wide audience." --Hans van Wees, author of Greek Warfare: Myths and
Realities

▼▲
I'm the author/artist and I want to review After Thermopylae: The Oath of Plataea and the End of the Graeco-Persian Wars.
Back