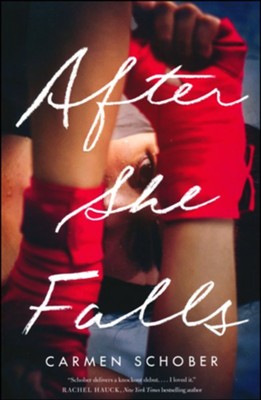 ▼▲
Strong-willed Adri Rivera always dreamed of becoming a professional mixed martial artist . . . but then she fell in love with an abusive man who smashed everything to pieces. Fleeing with her young daughter to her hometown in the mountains of Pennsylvania, she ponders the future. Is she brave enough to get back in the fight? 352 pages, softcover from Bethany.

▼▲
"Schober delivers a knockout debut. After She Falls is refreshingly unique and well-written. While the journey of faith and healing is set against the backdrop of the MMA, Schober's story world and characterization are vivid and evocative."--RACHEL HAUCK, New York Times bestselling author

She's always had that fire in her. She just needs to find it again.

Strong-willed Adri Rivera nearly achieved her goal of being a professional mixed martial artist, but then she fell in love with a man who knocked all the fight out of her. When their abusive, tumultuous relationship finally comes to a head, Adri flees with their young daughter to her small hometown in the mountains of Pennsylvania. There, she must face the people she left behind and put her broken life back together again.

A hardened Max Lyons can't believe Adri is back in town after abruptly cutting him and everyone else off years ago. Despite the distance that grew between them, he feels compelled to help her regain her independence and offers her a job at his gym. But regaining each other's trust is another matter, made even more complicated by the lingering spark between them. As Adri dares to pursue her dream again, she trains for a big tournament with Max's help, but they'll both have to confront their own doubts in order to rise victorious.

"Anyone who has watched a sports movie knows that the underdog will prevail, romance readers know that love wins, and Christian fiction readers know that God is bigger than any problem; Schober's debut novel is unique for being blend of the three."--LIBRARY JOURNAL

▼▲
Carmen Schober is a debut novelist, wife, full-time mother to two daughters, avid boxer, and Rocky enthusiast. A graduate of Kansas State University, where she earned a master's degree in English literature and creative writing, she currently lives in Manhattan, Kansas. She has published sports fiction in Witness magazine and Hobart Pulp, and she regularly blogs about faith, family, and fighting. Learn more at www.carmenschober.com.

▼▲
I'm the author/artist and I want to review After She Falls.
Back
Back