Skip to main content
After the Hangover: The Conservatives' Road to Recovery - eBook
By: R. Emmett Tyrrell Jr.
Stock No: WW4583EB 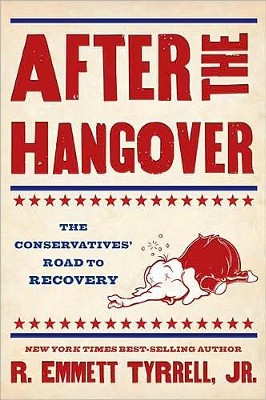 After the Hangover: The Conservatives' Road to Recovery - eBook

▼▲
The conservative party is not in a good position. Dealing with a post-Bush legacy, R. Emmett Tyrell Jr.-editor of the "American Spectator" is both cutting and constructive. Analyzing the conservative movement before the 2010 mid-term elections, discover who was right and what went wrong.and what the agenda needs to be for the "next ascendancy." 320 pages, hardcover with dust jacket.

Looking for real hope and change?

The man Hardball host Chris Matthews calls “the legendary R. Emmett Tyrrell Jr.” has done it again. Tyrrell, author of such tours de force as New York Times bestseller Boy Clinton: The Political Biography, The Liberal Crack-Up, and The Conservative Crack-Up, serves up an insightful and delightful exploration of the past, present, and future of American conservatism, or what he terms, “America’s longest dying political philosophy.” And its future is bright.

Tyrrell begins with a sparkling distillation of conservative theory and history, complete with personal anecdotes from his decades in the movement, inspired by its luminaries, bored by its dim bulbs. He explains the nature of the conservative temperament—its “political libido”—and how it plays out in today’s curious political culture; examines the vital role of a true “political culture” and solidarity in opposing the left and then offers a comprehensive agenda for the future of the movement that every political player on both the right and the left will have to read to grapple with in 2010 and 2012.

Tyrrell also considers American Liberalism—its excesses, quirks, and near suicidal instinct. Far from offering mere indictment, however, Tyrrell also delivers a unique perspective on Liberalism’s strengths, such as its intramural ecumenism and rare ability to rally around shared causes, explaining how conservatives could learn and profit from the example.

It goes without saying that through it all Tyrrell’s famous humor crackles and lifts the spirit. Conservatives looking for perspective on the current scene, a richer understanding of their shared past, and hope for the future will find After the Hangover as refreshing as it is restorative.

“No columnist, no author, has had a greater influence upon the course of American political history over the past decade than that ribald contrarian, R. Emmett Tyrrell Jr. Even the slain giants die laughing.” ?TOM WOLFE

“Washington would not be the same without Bob Tyrrell and neither would the American conservative movement. While dilettantes come and go, the relentless and irrepressible Tyrrell is forever.” ?DAILY TELEGRAPH (LONDON)

“Tyrrell is the master of a particular form—taking broken shards of silliness, deviance, hypocrisy, crime, and treason, shaping them into Erasmian examples of human folly, and doing so with style and flow.” ?ARAM BAKSHIAN

“Tyrrell alerts us to the dangers our political system faces . . . and he does it with the insight, wit, and style that mark him as a great American writer.” ?BOB BARR

“R. Emmett Tyrrell Jr. has written a stimulating book which should cause many Americans to rethink positions they have taken in the debates of the past decade.” ?HENRY KISSINGER

“For a man I disagree with as much as Emmett Tyrrell . . . I must say that I enjoyed the sheer hell out of his book.” ?NORMAN MAILER

▼▲
I'm the author/artist and I want to review After the Hangover: The Conservatives' Road to Recovery - eBook.
Back
Back