After the Funeral: Hercule Poirot Investigates - eBook
By: Agatha Christie 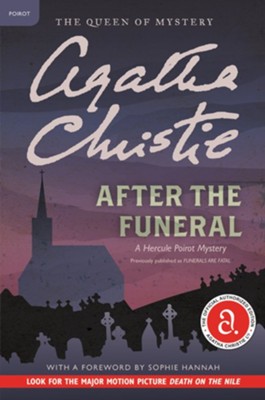 Hercule Poirot is called on to investigate the murder of a brother and sister, in this classic Agatha Christie mystery now available in an updated edition with a foreword Sophie Hannah.

When Cora Lansquenet is savagely murdered, the extraordinary remark she had made the previous day at her brother Richard’s funeral suddenly takes on a chilling significance. At the reading of Richard’s will, Cora was clearly heard to say, “It’s been hushed up very nicely, hasn’t it. But he was murdered, wasn’t he?”

Did Cora’s accusation a dark truth that sealed her own fate? Or are the siblings’ deaths just tragic coincidences?

Desperate to know the truth, the Lansquenet’s solicitor turns to Hercule Poirot to unravel the mystery. For even after the funeral, death isn’t finished yet . . .

Agatha Christie is the most widely published author of all time, outsold only by the Bible and Shakespeare. Her books have sold more than a billion copies in English and another billion in a hundred foreign languages. She died in 1976.

▼▲
“Agatha Christie’s puzzles have delighted fans for decades.”
“Complete with a genealogical tree, a dubious will, and a family full of potential murderers.”

▼▲
I'm the author/artist and I want to review After the Funeral: Hercule Poirot Investigates - eBook.
Back
×
Back
×