Skip to main content
After the Election: Prophetic Politics in a Post-Secular Age - eBook
By: Ron Scott Sanders
Stock No: WW110018EB 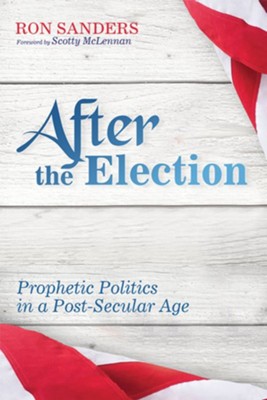 After the Election: Prophetic Politics in a Post-Secular Age - eBook

▼▲
The role of Evangelical Christianity in American public life is controversial. The mythology of America as a "Christian nation" and the promissory note of secularism have proved inadequate to cope with the increasing pluralism, the resilience of spirituality, and the wariness toward formal religion that mark our post-secular age. Christianity and democracy have a complex history together, but is there a future where these two great traditions draw the best out of one another? What does that future look like in a heterogeneous society? Sanders argues that democracy is stronger when it allows all of its religious citizens to participate fully in the public sphere, and Christianity is richer when it demonstrates the wisdom of God from the ground up, rather than legislating it from the top down. In this reality, the Evangelical church must return to Christianity's prophetic roots and see itself as a "community in exile," where participation in the political is important, but not ultimate--where the substantive work of the church happens "after the election."

▼▲
Ron Sanders is an Affiliate Faculty in Christian Ethics at Fuller Theological Seminary. His research is focused on the intersection of Christianity and American public policy. He teaches courses on Christian ethics, faith and politics, and biblical and practical peacemaking. He has also served as a campus minister at Stanford University for seventeen years, where he has been an active member of the religious life on campus.

▼▲
I'm the author/artist and I want to review After the Election: Prophetic Politics in a Post-Secular Age - eBook.
Back
Back