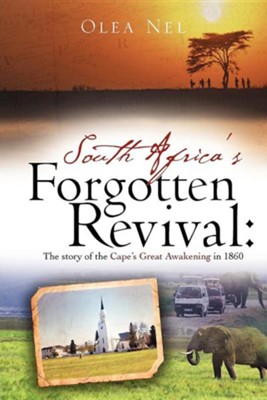 South Africa's Forgotten Revival: The Story of the Cape's Great Awakening in 1860

▼▲
Although the Great Awakening at the Cape in 1860 was as powerful as its precursors in America, Ireland and Wales, its story has never been fully told until now. Dr. Olea Nel has succeeded in filling a much needed gap in the literature by describing these events through the lives of three key players: Andrew Murray, Nicolaas Hofmeyr and Gottlieb van der Lingen. As the story unfolds, you will learn: .About the crisis in the Dutch Reformed Church prior to revival when semi-literate stock farmers believed that God had called them to subdue the African tribes, not evangelize them. .How virtually overnight the revival demolished this outlook so that awakened Christians became people of prayer and mission enthusiasts. .How Andrew Murray defended the Church against the onslaught of liberalism through legal battles in the Cape High Court as well as the Privy Council, London. Dr. Olea Nel was born in Cape Town, South Africa. After completing her training as a teacher in Andrew Murray's heartland of Wellington, she relocated to Australia to further her studies. Besides attaining a Ph.D. in Linguistics, she also has qualifications in Information Studies and Theology. She has taught at several tertiary institutions and presently supports her husband who is Senior Pastor of the Austral-Asian Church in Canberra, Australia.

▼▲
I'm the author/artist and I want to review South Africa's Forgotten Revival: The Story of the Cape's Great Awakening in 1860.
Back