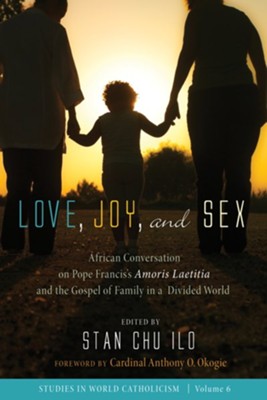 Love, Joy, and Sex: African Conversation on Pope Francis's Amoris Laetitia and the Gospel of Family in a Divided World - eBook

▼▲
There is no papal document that has generated as much interest, controversy, and debate in recent times as Pope Francis's Amoris Laetitia. This document, which came out of two very divisive synods of Catholic bishops and leaders in Rome in 2014 and 2015, will probably be the most discussed document ever produced by a pope in modern Catholicism on marriage and family life. This volume has gathered seminal commentaries on Amoris Laetitia by African Catholic theologians, social scientists, and pastoral workers. They offer African theological and pastoral responses to the principles and practices proposed by Pope Francis and the Synod on the family on such contested issues as same-sex relations, divorce and remarriage, and reception and denial of Holy Communion in the church, among other divisive issues. These important essays and commentaries show the strengths and weaknesses of this papal commentary and point out the missing link in the global conversation on marriage, family, and same-sex relations. Their argument for the inclusion of African perspectives and moral traditions in the search for a third way in finding an inclusive and integrated pastoral art of accompaniment is very compelling. The authors here also call for the inclusion of Africa's own unique challenges--like polygamy, childless marriages, and the impact of migration, civil conflict, diseases, ecological and population crises, and the rights of African women--in the global discussion on marriage and family life. They also challenge uncritical cliches in world Christianity that Africa's opposition to same-sex marriages (or Western propaganda about population or birth control and contraception) are conservative, while showing diverse African conversations on these topics in the search for abundant life on this beautiful continent.

▼▲
Stan Chu Ilo is a research professor at the Center for World Catholicism and Intercultural Theology at DePaul University, Chicago, where he coordinates the African Catholicism Project. He is the author of A Poor and Merciful Church: The Illuminative Ecclesiology of Pope Francis and editor of Wealth, Health, and Hope in African Christian Religion. He is the 2017 winner of the AfroGlobal Excellence Award for Global Impact.

▼▲
I'm the author/artist and I want to review Love, Joy, and Sex: African Conversation on Pope Francis's Amoris Laetitia and the Gospel of Family in a Divided World - eBook.
Back
Back