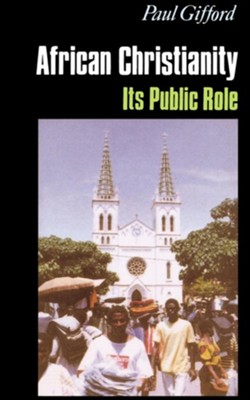 "This is by far the most informative book about contemporary African Christianity around; nobody could have written a study as richly detailed and as informed by real insider knowledge as he has done.... It will be the most significant study of African Christianity to appear at a time when its importance for Africa is becoming ever more widely recognized." --J. D. Y. Peel

"A sophisticated political and social analysis of the various Christian groups is allied to a most original, consistent exploration of their different theological positions and thinking.... An interesting, important critical assessment of the extent to which the churches are playing a major role in the emergence of a civil society.... Gifford's overall analysis and his four case studies are so fresh and so important that... they cry out for immediate publication." --Richard Gray

Paul Gifford analyzes African Christianity in the mid-1990s, against the background of the continent's current social, economic, and political circumstances. Gifford employs concepts taken from political economy to shed light on the current dynamics of African churches and churchgoers and assesses their different contributions to political developments since 1989. He also evaluates the churches' role in promoting a civil society in Africa. Four case studies--Ghana, Uganda, Zambia, and Cameroon--cover all strands of Christianity: Catholic, Evangelical, mainline Protestant, Pentecostal, and Independent. These detailed analyses of the state of the churches in each country also suggest more general patterns operating widely across sub-Saharan Africa.

▼▲
I'm the author/artist and I want to review African Christianity: Its Public Role.
Back