Skip to main content
SPRING CYBER EVENT STARTS NOW: And it's a really BIG deal! Up to 88% off through 5/24>
African Christian Mothers and Fathers
By: Mark Ellingsen
Stock No: WW085509 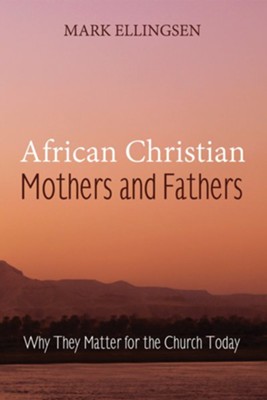 ▼▲
After almost a millennium and a half, scholars are rediscovering the theological roots of Christianity in ancient North Africa But we still have a long way to go in bringing these insights to the Church's consciousness. What has been needed is a careful but accessible analysis of what the great theologians of the region prior to and contemporary with Augustine actually taught about the faith, and why what they said still matters today. African Christian Mothers and Fathers is precisely the book we have needed, an explanation of the theology of these great, though in some cases forgotten, early church leaders for scholars, seminarians, pastors, and laity. Mark Ellingsen, author of an acclaimed book on the thought and life of Augustine, takes readers on an insightful tour of the theological landscape of North Africa and its thought from the late first through the early fifth centuries, and brings us back to the present enriched with ancient but fresh ideas for living the faith. ""Ellingsen's book is an accessible, well-organized, and effectively written treatment of the importance and enduring legacy of ancient North African Christianity. Through weaving together profiles of the important theological contributions of North African thinkers ranging from Anthony to Augustine, Elllingsen subtly makes the point that Christianity in Africa today was not simply planted by forces of colonialism, but is instead an 'indigenous faith' of that continent. This book will be of great interest to both scholars and students alike, particularly those interested in understanding Christianity as a global phenomenon."" --Michael K. Turner, Hood Theological Seminary, Salisbury, NC ""One of the finest pieces of scholarship ever written on largely pre-Augustinian African Christian thought, African Christian Mothers and Fathers is Mark Ellingsen's latest remarkable and solid contribution to autochthonous African Christian spirituality. Taking into its broad sweep the African treatment of fundamental doctrinal and soteriological topics, the book amply evinces the relevance of the early African church to the modern church catholic: ubi spiritus, ibi ecclesia."" --Chris Synodinos, Clark University, Worcester, MA ""The present volume emphasizes several aspects of thoughts and methods of early theologians of North Africa in the first centuries of our era and discloses important facets of their work. It highlights the origin and the growth of Christianity in Africa and constitutes an essential contribution to a more exact and well-rounded knowledge of the social culture and church life."" --Helene Perdicoyianni-Paleologou, Senior Research Fellow, Department of Classics, University of Johannesburg, Auckland Park, South Africa Mark Ellingsen is Professor of Church History at the Interdenominational Theological Center in Atlanta. The author of nineteen books and hundreds of published articles, his most important books in the field of church history include The Richness of Augustine, Sin Bravely, and his widely used two-volume textbook, Reclaiming Our Roots.

▼▲
I'm the author/artist and I want to review African Christian Mothers and Fathers.
Back