Skip to main content
African, Christian, Feminist: The Enduring Search for What Matters
By: Teresia Mbari Hinga
Stock No: WW982490 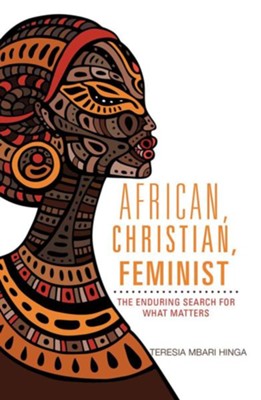 African, Christian, Feminist: The Enduring Search for What Matters

For the past two decades, Teresia Hinga has been a leading academic voice in the fields of African Christianity, women in African theology, and gender and ethics in the African context. Gathered here for the first time are Hinga's own selections from her extensive body of work, both previously pub­lished and unpublished.

Revealing the breadth and depth of Hinga’s scholarly endeavors, this collection is a valuable resource for scholars and students, particularly those working at the intersection of multiple disciplines.

Teresia Mbari Hinga is associate professor in the re­ligious studies department at Santa Clara Uni­versity. Born in Kenya, she received her Ph.D. in religious studies (focusing on Gender in African Catholic Christianity) from Lancaster University in England in 1990. Her scholarly/research interests include women and religion, religion and contemporary moral issues, and religion and ethics in the public square. She is a founding member of The Circle of Concerned African Women Theologians and the Associa­tion of African Women Theologians.

▼▲
I'm the author/artist and I want to review African, Christian, Feminist: The Enduring Search for What Matters.
Back
Back