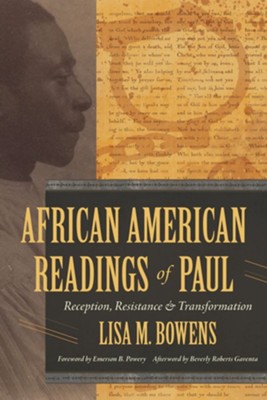 The letters of Paul-especially the verse in Ephesians directing slaves to obey their masters-played an enormous role in promoting slavery and justifying it as a Christian practice. Yet despite this reality African Americans throughout history still utilized Paul extensively in their own work to protest and resist oppression, responding to his theology and teachings in numerous-often starkly divergent and liberative-ways.

In the first book of its kind, Lisa Bowens takes a historical, theological, and biblical approach to explore interpretations of Paul within African American communities over the past few centuries. She surveys a wealth of primary sources from the early 1700s to the mid-twentieth century, including sermons, conversion stories, slave petitions, and autobiographies of ex-slaves, many of which introduce readers to previously unknown names in the history of New Testament interpretation. Along with their hermeneutical value, these texts also provide fresh documentation of Black religious life through wide swaths of American history. African American Readings of Paul promises to change the landscape of Pauline studies and fill an important gap in the rising field of reception history.

▼▲
Lisa M. Bowens is associate professor of New Testament at Princeton Theological Seminary. She is also the author of An Apostle in Battle: Paul and Spiritual Warfare in 2 Corinthians 12:1-10.

▼▲
Jesus Creed
"This is a special book in its painstaking historical culling of sources largely unknown and for showing how the apostle Paul was read by American slaves. It should be in every theological library, and it can be used as a textbook in hermeneutics classes to examine how Paul has been read and still can be read."

"[African American Readings of Paul] reveals an extensive African American (and proto-womanist) tradition engaged in the practice of reclaiming Paul from white supremacist and black patriarchal discursive modes."
— Emerson B. Powery
from the foreword

"Lisa Bowens’s work provides a glimpse into the life and thought of people for whom the interpretation of Paul has been nothing less than a matter of life and death. They deserve our attention, our respect, our emulation."
— Beverly Roberts Gaventa
from the afterword

"It is difficult to imagine a more timely and yet timeless narrative of biblical hermeneutics than this important—and often disturbing—volume from Lisa Bowens. She introduces us to interpreters of the apostle Paul we all need to know, though few of us do. This is not only a book about reception, resistance, and transformation, but also a book that offers hope and healing."
— Michael J. Gorman
St. Mary’s Seminary & University, Baltimore

"Lisa Bowens has offered us an illuminating historical survey of various ways in which African American interpreters have engaged in vigorous, spirit-led readings of Paul’s letters. She demonstrates that many of their writings have countered oppressive readings by white interpreters who, tragically, buttressed violent practices of racism and slavery by pointing to Pauline prooftexts. By recovering the voices of these African American witnesses, Bowens helps us see that a hermeneutics of trust can be—and has been—a hermeneutics of liberation."
— Richard B. Hays
Duke Divinity School

"Lisa Bowens demonstrates how a broad range of African American men and women from the eighteenth to the twentieth century creatively adapted Paul’s writings in support of their various pursuits for social justice. Undoubtedly, readers will gain many new insights from this extraordinary book which adds both breadth and depth to Paul’s relevance for our present age."
— Peter J. Paris
Princeton Theological Seminary

"In this era of renewed reckoning with racial injustice, scholars, students, and laypeople alike must come to terms with New Testament scholarship’s longstanding and unforgiveable occlusion of African American voices. With this volume, Bowens issues a clarion call: Black biblical interpretation matters. It has always mattered. May we all listen deeply and be transformed."
— Michal Beth Dinkler
Yale Divinity School

"Among several fine recent books on African American use of Scripture, African American Readings of Paul is one of the very best. Lisa Bowens pays careful attention to what Black authors wrote about the Apostle Paul, how they used his writings, and how they dealt with Pauline passages that seem to take slavery for granted. This book makes a signal contribution to American history, but also to general hermeneutical questions about understanding and using the Scriptures."
— Mark A. Noll
author of The Civil War as a Theological Crisis

"What happens when African Americans are at the center of Pauline interpretation? This book provides an answer by tracing African American interpretation of Paul from the mid-eighteenth century to the end of the twentieth. Here we find not the Paul used by slaveholders or white racists who calls for submission and blind obedience, but Paul the liberator, the spiritual guide to the third heaven, and the champion of bodily integrity. While not all African American interpreters embraced Pauline texts, Bowens shows how many of them did, employing Paul’s words in provocative and powerful ways. Students and faith leaders will welcome this text for the fresh insights it gives into Paul’s letters."
— Shelly Matthews
Brite Divinity School

"In this singular work on the reception history of Paul among African Americans from the eighteenth to the twentieth century, Dr. Bowens has provided us with a densely packed treasure-trove of information, analysis, and insight. Bowens elegantly and compellingly demonstrates the central role Paul plays in the struggle for African Americans to confront white supremacy and the dehumanization of black bodies across centuries. If you are looking for one book that will bring you up to date on African American hermeneutics, this is it. Bowens has taught me new knowledge and has provided me a way to draw students into the study of Paul in a gripping, relevant way."
— Jaime Clark-Soles
Perkins School of Theology

▼▲
I'm the author/artist and I want to review African American Readings of Paul: Reception, Resistance, and Transformation.
Back
Back