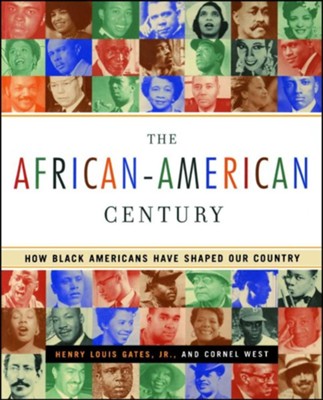 ▼▲
In this book the editors present the definitive collection of black vrese in the United States - from the neoclassical stylings of slave-born Phillis Wheatly to the postmodern artistry of Yusef Komunyakaa. Here is the oracular vision of Nobel Prize winner Derek Walcott, the laintive rhapsodies of an imprisoned Etheridge Knight. Here, too, is a landmark exploration of lesser-known artists - including perhaps the tradition's most accomplished practitioner, Sterling A. Brown - whose efforts birthed the Harlem Renaissance and the Black Arts movements - and changed forever not only our national literature but the course of America itself. Meticulously researched, thoughtfully structured, The Vintage Book of African American Poetry is a collection of inestimable value to all those interested in the ever-evolving tradition that is American poetry.

▼▲
One hundred original profiles of the most influential African-Americans of the twentieth century.

Without Louis Armstrong or Miles Davis, we would not have jazz. Without Toni Morrison or Ralph Ellison, we would miss some of our greatest novels. Without Dr. King or Thurgood Marshall, we would be deprived of political breakthroughs that affirm and strengthen our democracy. Here, two of the leading African-American scholars of our day, Henry Louis Gates, Jr., and Cornel West, show us why the twentieth century was the African-American century, as they offer their personal picks of the African-American figures who did the most to shape our world.

This colorful collection of personalities includes much-loved figures such as scientist George Washington Carver, contemporary favorites such as comedian Richard Pryor and novelist Alice Walker, and even less-well-known people such as aviator Bessie Coleman. Gates and West also recognize the achievements of controversial figures such as Nation of Islam leader Louis Farrakhan and rap artist Tupac Shakur. Lively, accessible, and illustrated throughout, The African-American Century is a celebration of black achievement and a tribute to the black struggle for freedom in America that will inspire readers for years to come.

▼▲
Henry Louis Gates, Jr., is the W. E. B. Du Bois Professor of the Humanities, chair of the Department of Afro-American Studies, and director of the W. E. B. Du Bois Institute for Afro-American research at Harvard University. Among his many books are Colored People: A Memoir and Wonders of the African World. He won an American Book Award in 1989 for The Signifying Monkey.

▼▲
I'm the author/artist and I want to review African-American Century.
Back
×