Skip to main content
Africa and the Bible
By: Edwin M. Yamauchi
Stock No: WW031192 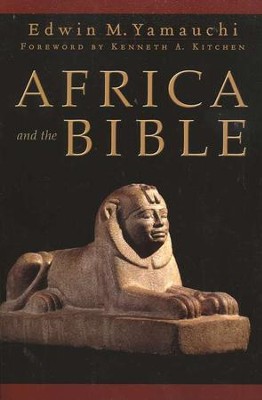 Africa and the Bible

▼▲
The curse of Ham has been used for many years as the justification for slavery. But is our biblical history askew? Could Jesus or Moses have been black? Although the connection between the Bible and Africa has been made, biblical references have been overlooked on the matter. The afrocentric studies that have been done often overlook the vast amount of archaeological evidence available.

This book deals with the historical as well as the archaeological resources available to understanding biblical texts that deal with Africa. Dr. Yamauhi includes black and white maps, charts, author, subject, and Scripture indexes, and an appendix critiquing Black Athena. This is a must read for anyone who wants to learn about biblical history.
Edwin M. Yamauchi (Ph.D., Brandeis University) is professor of history emeritus at Miami University, Ohio. He is the author or editor of numerous books, including Persia and the Bible, Greece and Babylon, The Archaeology of New Testament Cities in Asia Minor, Harper's World of the New Testament, and Africa and Africans in Antiquity. A co-edited work, Peoples of the Old Testament World, won a Biblical Archaeological Society Award.

▼▲
The "curse of Ham" has been used to legitimize slavery. Both Ethiopians and Arabians claim the queen of Sheba. Could Moses and Jesus have been black?

Edwin Yamauchi explores the historical and archaeological background of biblical texts that refer to Africa and traces the results of past interpretations and misinterpretations. He covers such topics as the curse of Ham's son Canaan, Moses' Cushite wife, Simon the Cyrene, and afrocentric biblical interpretation. Along the way, he dispels myths, interacts with current theories, and provides readers with sound judgments as to what the Bible does and does not say.

Readers interested in the connections between Africa and the Bible will enjoy this insightful book. More then eighty photos, maps, and charts are included.

▼▲
Edwin M. Yamauchi (Ph.D., Brandeis University) is professor of history emeritus at Miami University, Ohio. He is the author or editor of numerous books, including Persia and the Bible, Greece and Babylon, The Archaeology of New Testament Cities in Asia Minor, Harper's World of the New Testament, and Africa and Africans in Antiquity. A co-edited work, Peoples of the Old Testament World, won a Biblical Archaeological Society Award.

2006-2007 president of the Evangelical Theological Society and long-time professor of History at Miami University (Ohio), Dr. Edwin Yamauchi is an outstanding scholar who has published extensively on Africa and the Near East, an interest that culminates in this landmark volume.

Following a brief, promotional foreword by noted Egyptologist Kenneth Kitchen, and a preface that serves functionally as a helpful introduction, he presents the following topics as organizational guideposts around which he piles a wealth of information: 1) The Curse of Ham; 2) Moses' Cushite Wife; 3) Solomon and Africa; 4) Tirhakah and Other Cushites [see 2 Kings 19:9; Isa. 37:9]; 5) Rome and Meroe; 6) Why the Ethiopian Eunuch Was Not from Ethiopia; 7) Cyrene in Libya; 8) Afro-centric Biblical Interpretation; and an appendix reviewing the controversy over Martin Bernal's Black Athena. The book closes with an extensive bibliography, source credits and three indices. A fourth index listing the illustrations is situated helpfully before the foreword and after the table of contents. A reader might imagine this book as a huge motor sales parking lot where one has parked one's attention at a number pole of interest and gone browsing. When one moves on, one discovers the lot is full of vehicles crowded around each pole marking off each section. In chapter after chapter he has lined up an immense amount of information, 87 fascinating illustrations, with a wealth of citations to satisfy the most ardent student.

Quite remarkable for a book of this nature is the attention he pays from time to time to the human element in his subject, for example, including a poignant description of the plight of the gold miners of Cush from a second century witness, Agatharchides of Cnidus: "It is impossible for an observer to not pity the wretches because of the extremity of their suffering. For they meet with no respite at all, not the sick, the injured, the aged, not a woman by reason of her weakness, but all are compelled by blows to strive at their tasks until, exhausted by the abuse they have suffered, they die in their miseries" (52). One will never again look at an Egyptian gold artifact as an innocent relic after reading of the agony that was exacted securing its metal content.

Priscilla Papers readers will also appreciate the interesting chapter on Candace, the queen of Meroe, which is the actual country of the Ethiopian eunuch, the sections on the Queen of Sheba, the Cushite Moses married (who Yamauchi proves was other than Zipporah), and other women.

Such attention to black and female presence in the sacred text is in line with his stated goal for his African studies: "to correct misconceptions and to supply relevant information" (16). As an Hawaiian of Japanese extraction, himself, he is keenly aware that "there is clear evidence of a Eurocentric racist bias in certain interpretations that exalt whites" (211). He achieves his goal of correcting this bias by painstaking sifting of the data, drawing conclusions when they are warranted, and leaving a question open when that is appropriate. Consequently, readers looking for a "quick read" will not find it here, but those seeking an illuminating and satisfying analysis of the topic from one of the most distinguished two-thirds world voices in contemporary Evangelicalism will find this a treasure trove. Each reader will discover different insights standing out: the Moslem (not Christian) highlighting of an ultrarare Talmudic reference to apply the curse of Ham illegitimately to blacks, thereby providing a philosophical basis for the slave trade; a survey of the theories of the true location of Ophir, the site of King Solomon's mines; evidence for deciding the probable color of Simon of Cyrene, who carried Jesus' cross; and on and on.

In this day when Thomas Friedman is reminding us the world has been "flattened" by globalization and Christianity Today is counseling, "All churches should be multicultural" (April 2005), this responsible analysis of Africa's presence in the Bible should be must reading for all thinking Christians who want to deepen their knowledge of the ethnic equality of Christians throughout the ages and in particular the true presence of Africans in our sacred Scripture.

▼▲
I'm the author/artist and I want to review Africa and the Bible.
Back
Back