Skip to main content
Aelred of Rievaulx (1110-1167): An Existential and Spiritual Biography
Translated By: Christopher Coski
By: Pierre-André Burton
Stock No: WW072766 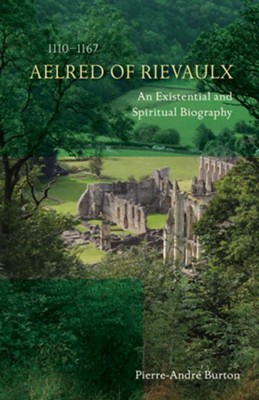 Aelred of Rievaulx (1110-1167): An Existential and Spiritual Biography

This book places the life of Aelred of Rievaulx, third abbot of the English Cistercian abbey of Rievaulx, within the hundred-year period from the Norman Conquest of England in October 1066 through Aelred's death in January 1167. While exploring what is known of Aelred's life from his own works and especially from the principal work of Walter Daniel, author of The Life of Aelred of Rievaulx, Burton considers the influence of both English and church history on Aelred's personality and purpose as Christian, abbot, and writer. He emphasizes the place of the crucified Christ at the center of Aelred's life while calling spiritual friendship—not only personal but cosmological—the "hermeneutic key" to his teaching.

Pierre-André Burton, OCSO, is abbot of the Cistercian Abbey of Sainte-Marie du Désert. After receiving a degree at the Université Catholique de Louvain-la-Neuve, he entered Notre-Dame de Scourmont Abbey (Chimay) in 1987; he transferred his stability to Désert in 1999. He is on the editorial board of Cîteaux. His Aelred de Rievaulx (1110–1167): Essai de Biographie Existentielle et Spirituelle appeared in 2010, with a supplement in A Companion to Aelred of Rievaulx (1110–1167), in Brill's Companions to the Christian Tradition 76 (Brill, 2017). The two volumes of his Vers l’infini d’une autre lumière, containing several of his articles from Cîteaux and Collectanea Cisterciensia, were published in 2013 by Pain de Cîteaux.

Christopher Coski is a professor of French and chair of the Department of Modern Languages at Ohio University, where he teaches early modern French literature and the cultural history of France from the Middle Ages to the Revolution. He is the author of From Barbarism to Universality: Language and Identity in Early Modern France (University of South Carolina Press, 2011). His articles on French Enlightenment philosophies of language and mind have appeared in French Forum, French Review, Dalhousie French Studies, Essays in French Literature, and 1650–1850: Ideas, Aesthetics, and Inquiries in the Early Modern Era. He also serves as an assistant editor for the French Review.

▼▲
"Aelred was the son of a married priest at a time when that institution was fast disappearing. Aelred’s intellectual development at the count of the Scottish king, his conversion to monastic life in the new and flourishing Cistercian order, and his role as teacher, as monk, and as abbot have given rise to the intense scholarship displayed in this work. Burton builds his profound insight into Aelred’s spirituality on the framework supplied by his study of the stages in Aelred’s life. This work is both historically profound and theologically insightful. Burton’s work is a masterful study of a spiritual giant."
John R. Sommerfeldt, Professor Emeritus, University of Dallas
"A rich and detailed study of the best-known of English Cistercians, from his childhood as the son of a married priest of Hexham, through his formative years at the Scottish court, to his conversion and entry into the Yorkshire Cistercian abbey of Rievaulx, and his subsequent monastic career as monk, novice-master, and abbot. This is far more than a narrative: Burton demonstrates how Aelred’s life before and after he became a monk, and his engagement with the world outside the cloister, were permeated by the importance of friendship and love, and by his search for harmony, reconciliation, and unity, through friendship, with God."
Janet Burton, Professor of Medieval History, University of Wales Trinity Saint David (Lampeter)​
"In this beautiful and sensitive study, Pierre-Andr&eacute; Burton gives readers a holistic examination of Aelred of Rievaulx’s personal biography and writings, arguing that the holistic approach is the key to understanding both Aelred the man and the rich theology, anthropology, and spirituality Aelred offers to readers. Using his profound familiarity with the entirety of Aelred’s written oeuvre—spiritual treatises, historical writings, sermons—as well as other medieval Cistercian writings, Burton produces a richly woven narrative whose separate threads provide striking insights in their own right and a unified image in their sum. From this book, we see so much more than one man. Aelred’s life-long quest for unity, reconciliation, and harmony was manifest in different ways at different times and for different audiences, both monastic and secular, yet in these different examples the reader—both in the twelfth century and today—is offered a consistent, and expanding, theology. This unique study, translated here into elegant English by Christopher Coski, is much more than the sum of its parts, which is precisely what it shows was the case with Aelred’s individual actions and writings as well."
Elizabeth Freeman, Senior Lecturer in Medieval European History, University of Tasmania
"Ten years after its original publication, Abbot Pierre-Andre Burton's groundbreaking biography of Aelred of Rievaulx is now available in English translation. Truly a production worth waiting for."
Catholic Books Review

"This is quite a prodigious work. The appendix and footnotes are alone with the effort of looking this book over, let alone finding such in depth history and information on this great monk."
Catholic Media Association

▼▲
I'm the author/artist and I want to review Aelred of Rievaulx (1110-1167): An Existential and Spiritual Biography.
Back