Skip to main content
Aelred the Peacemaker: The Public Life of a Cistercian Abbot
By: Jean Truax
Stock No: WW072513 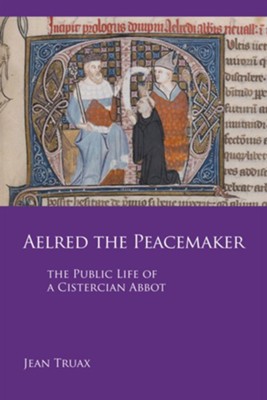 Aelred the Peacemaker: The Public Life of a Cistercian Abbot

In addition to being a prolific spiritual writer and the abbot of the premier Cistercian monastery in northern England, Aelred of Rievaulx somehow found the time and the stamina to travel extensively throughout the Anglo-Norman realm, acting as a mediator, a problem solver, and an adviser to kings. His career spanned the troubled years of the civil war between King Stephen and the Empress Matilda and reached its zenith during the early years of the reign of Henry II.

This work focuses on Aelred's public career as revealed in his own historical writing as well as in chronicle references and other documents. This aspect of his life has been previously neglected because his personal letters have been lost and his biographer, Walter Daniel, concentrated on his life within the monastery.

▼▲
"This meticulously researched, thoroughly documented study describes fully for the first time Aelred of Rievaulx's political career. Most scholars focus on Aelred's spirituality, friendships, or monasticism. Truax reconstructs his patronage networks that financially supported his abbey and ensured its survival during the anarchy of Stephen's reign, his influence on neighboring Celtic rulers, and his advisory roles to two kings, Scotland's David I and England's Henry II. Uniquely, she uncovers his friendships for and support of cloistered women, which he saw as equal to monks, and his opposition to Archbishop Thomas Becket, which shaped Aelred's posthumous reputation. This important new perspective enriches the massive scholarship on Aelred."
Sally N. Vaughn, PhD, Professor, Department of History, University of Houston

"In this readable and informative book, Jean Truax paints an unforgettable picture of Aelred of Rievaulx as an important player in the tumultuous public affairs of his day, a counsellor to kings and bishops, and a moderator in legal disputes. This context shows Aelred's historical writings-his Report of the Battle of the Standard, Lament for David I of Scotland, Genealogy of the Kings of England-to be integrally related to his public sermons, hagiographies, and correspondence. Drawing out the implications of passing comments and puzzling omissions in Walter Daniel's Life of Aelred of Rievaulx, Truax builds a persuasive case that Aelred's reputation among his fellow monks fell under a shadow due to his political activities outside the monastery's walls and, most especially, to his support of Henry II in his quarrel with Thomas Becket who, four years after Aelred's death, became England's most famous saint and martyr."
Ann W. Astell, University of Notre Dame

"Aelred is eminent for his monastic teaching and spiritual doctrine on friendship. Presenting Aelred as politician and peacemaker, this book offers a brilliant perspective into a previously neglected feature in the life of the most distinguished abbot of Rievaulx. Jean Truax has accomplished a mammoth service by organizing an incredible amount of resources so as to create and evaluate the influential public life of this Cistercian abbot. Aelred is presented in his contemporary setting moving among friends and rivals as spiritual abba, abbatial administrator, historian, builder, mediator, and counselor to kings and to St. Thomas Becket."
Abbot Thomas X. Davis, OCSO, Abbey of New Clairvaux

"With an abundance of well-documented detail, Jean Truax portrays Aelred as a man of exceptional energy, who remained actively engaged in monastic and public affairs up to the end of his life. By sticking to the historical record and avoiding sterile discussions of Aelred's personality or motivations, she brings out the rich texture of the abbot's life within the context of Rievaulx, the wider church, and the Anglo-Norman world. This book offers the fullest portrayal to date of his role as a mediator in all of these areas. Although Jean Truax does not claim to have unraveled all the complexities of Aelred's biography, her study gently loosens some of its most resistant knots."
Elias Dietz, OCSO, Abbey of Gethsemani

There is much rich historical detail here, on the chaotic political situation and troubles in the northern church. Jean Truax is to be congratulated for producing a book that is thoroughly researched, and that gives a rounded portrait of this intriguing abbot."
Northern History

"Jean Truax's thorough investigation and plausible reconstruction as set out in Aelred the Peacemaker will no doubt long remain the definitive treatment of this fascinating yet frustrating dimension of Aelred's life and work."
Patrick F. O'Connell, Catholic Books Review

"A useful, engaging book that brings together various dimensions of Aelred's career and from which many scholars interested in Aelred, the Cistercian, peacemaking, and Anglo-Scottish relations will profit."
The Journal of Medieval Monastic Studies

"This rich and detailed interpretation of Aelred's public life provides a window into the world of power politics and Cistercian life in the twelfth century that will be of interest to any student of the period."
Anglican and Episcopal History

"A thorough, yet highly readable study of the Cistercian abbot Aelred of Rievaulx's role in the public affairs of his day"
Reading Religion

"Fully and for the first time, Jean Truax describes the range of Aelred’s political activity, both secular and ecclesiastical. That description is based on deep and careful research, and the results are well documented."
Speculum

▼▲
I'm the author/artist and I want to review Aelred the Peacemaker: The Public Life of a Cistercian Abbot.
Back