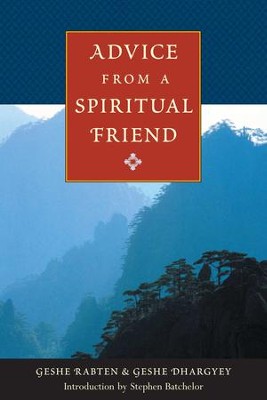 Advice from a Spiritual Friend - eBook

Edited By: Brian Beresford
Translated By: Brian Beresford
By: Geshe Rabten, Geshe Dhargyey
Wisdom Publications / 2015 / ePub
Write a Review
In Stock
Stock No: WW77386EB
Buy Item Our Price$10.89
In Stock
Stock No: WW77386EB
Wisdom Publications / 2015 / ePub
Add To Cart
of These in Your Cart

▼▲
Geshe Rabten (1921-86) was born in Dargye in eastern Tibet. He studied at Sera Monastery in Lhasa, where he gained renown as a great scholar, debater, and meditation master. In 1959, he escaped to India, where he became the spiritual teacher of Lama Yeshe and Lama Zopa Rinpoche. In the mid 1960s Geshe Rabten was appointed as a religious assistant to His Holiness the Dalai Lama. On His Holiness's request he began teaching Dharma to Westerners in Dharamsala in 1969, and he went to live and teach in Switzerland in 1974. He founded Rabten Choeling Center (originally Tharpa Choeling) in Switzerland in 1979, where he lived and worked as spiritual director until he passed away in 1986.

Geshe Ngawang Dhargyey taught Western students at the Library of Tibetan Works and Archives in Dharamsala. He moved to New Zealand in the early 1980s, where he lived until his death in 1995.

Stephen Batchelor has studied in Buddhist monasteries in India, Switzerland, and Korea. An accomplished writer and photographer, he has translated, written, and contributed to many books about Buddhism including Buddhism Without Beliefs, Verses from the Center, andThe Tibet Guide. He lives in the South of France.

Brian Beresford (1948-97) was a photographer, translator, and editor. Beresford translated and edited several Tibetan Buddhist texts, including the first Wisdom title ever published, Advice from a Spiritual Friend. His photographs of Tibetan lamas and scenes of Tibetan culture have been published worldwide. He was also one of the first Westerners to travel into the remote areas of western Tibet, which he visited between 1986 and 1993. Between 1973 and 1979 he lived in Dharamsala and studied at the Library of Tibetan Works and Archives. He took pictures of, studied with, and translated for Geshe Rabten, Geshe Ngawang Dhargyey, Lama Yeshe, and Lama Zopa, among other Tibetan masters. In the 1980s Beresford made his home in England, where in 1985 he helped found the Meridian Trust. At the end of his life, Brian was a student of the Dzogchen master Namkhai Norbu Rinpoche and a leading figure in the Dzogchen community.

▼▲
I'm the author/artist and I want to review Advice from a Spiritual Friend - eBook.
Back
Back