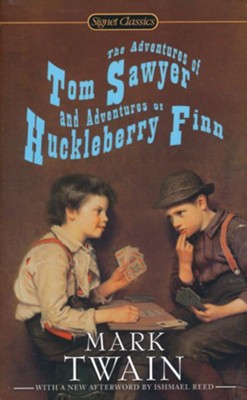 The Adventures of Tom Sawyer and the Adventures of Huckleberry Finn are Mark Twain's two enduring masterpieces. Take a nostalgic trip back in time to join in Tom Sawyer's mischievous adventures and witness the deeper themes present in Huckleberry Finn as Huck befriends a runaway slave named Jim. With an introduction by Shelley Fisher Fishkin and an afterword by Ishmael Reed. 534 pages, softcover.

▼▲
Two of Mark Twain's great American novels—together in one volume.

THE ADVENTURES OF TOM SAWYER

Take a lighthearted, nostalgic trip to a simpler time, seen through the eyes of a very special boy named Tom Sawyer. It is a dreamlike summertime world of hooky and adventure, pranks and punishment, villains and first love, filled with memorable characters. Adults and young readers alike continue to enjoy this delightful classic of the promise and dreams of youth from one of America’s most beloved authors.

He has no mother, his father is a brutal drunkard, and he sleeps in a barrel. He’s Huck Finn—liar, sometime thief, and rebel against respectability. But when Huck meets a runaway slave named Jim, his life changes forever. On their exciting flight down the Mississippi aboard a raft, the boy nobody wanted matures into a young man of courage and conviction. As Ernest Hemingway said of this glorious novel, "All modern American literature comes from one book by Mark Twain called Huckleberry Finn."

▼▲
Mark Twain was born Samuel Clemens in Florida, Missouri, in 1835, and died at Redding, Connecticut in 1910. In his person and in his pursuits, he was a man of extraordinary contrasts. Although he left school at twelve when his father died, he was eventually awarded honorary degrees from Yale University, the University of Missouri, and Oxford University. His career encompassed such varied occupations as printer, Mississippi riverboat pilot, journalist, travel writer, and publisher. He made fortunes from his writing, but toward the end of his life, he had to resort to lecture tours to pay his debts. He was hot-tempered, profane, and sentimental—and also pessimistic, cynical, and tortured by self-doubt. He lives in American letters as a great artist, the writer whom William Dean Howells called "the Lincoln of our literature."