We are OPEN and SHIPPING - click here for shipping estimates
The Adventures of Sherlock Holmes, Unabridged Audiobook on CD, includes eBook
By: Sir Arthur Conan Doyle 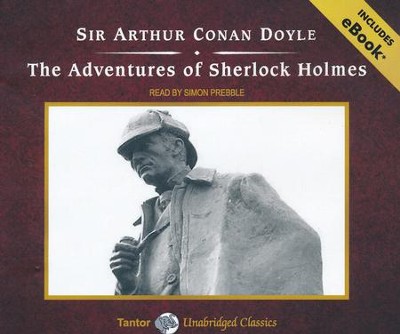 ▼▲
This gripping collection includes many of the famous cases-and great strokes of brilliance-that made the leg,endary Sherlock Holmes one of fiction's most popular creations. With his devoted secretary, Dr. Watson, Holmes emerges from his smoke-filled rooms on Baker Street to grapple with the forces of treachery, intrigue, and evil in such cases as "The Speckled Band," in which a terrified woman begs Holmes and Watson's help in solv,ing the mystery surrounding her sister's death, and "A Scandal in Bohemia," which portrays a European king blackmailed by his mis,tress. Includes 12 stories.Unabridged audio CD; approximately 10 hours; 8 CDs; read by Simon Prebble.

▼▲
I'm the author/artist and I want to review The Adventures of Sherlock Holmes, Unabridged Audiobook on CD, includes eBook.
Back
×
Back
×