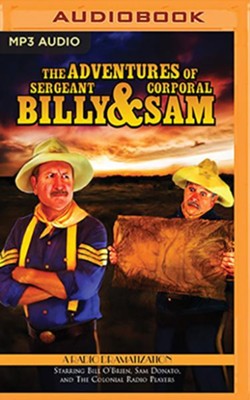 The Wild West wasn't really wild... it was just... confused!

THE COMPLETE SERIES. ALL 12 EPISODES

Sgt. Billy and Corp. Sam are sent on a dangerous mission to recover the stolen payroll box intended for Fort Cannon Ball in Bended Bow, Arizona. This twelve-episode comedy series stars Bill O'Brien, who co-starred for many years with Rex Trailer on the popular children's show Boomtown that enjoyed a 20-year run on WBZ-TV in Boston. Bill is reunited with another Boomtown alumni, Sam Donato, for this fun and hilarious adventure that travels from Whiskey Flats to Twitty Badlands, to a wild escape on skis to escape an avalanche on a Canadian mountain.

From the award-winning Colonial Radio Theatre on the Air, The Adventures of Sgt. Billy and Corp. Sam is filled with some great banjo plucking tunes and lots of laughs for the entire family.

And The Colonial Radio Players

Written and Directed by Jerry Robbins.

Episodes include: Double Cross At Criss-Cross/ The Kissing Bandit/ Run a Crooked Mile to Catch a Crooked General/ Ride The Low Country/ True Split/ Rio Loco/ North To Canada/ Calling All The Wilds/ I Ski, You Ski/ More Koppenhoppers/ Two Gals And a Sarge/ Daring Rescue

▼▲
I'm the author/artist and I want to review The Adventures of Sergeant Billy & Corporal Sam, Dramatized MP3-CD.
Back
×