Skip to main content
The Life Adventures and Piracies of the Famous Captain Singleton / Digital original - eBook
By: Daniel Defoe
Stock No: WW81944EB 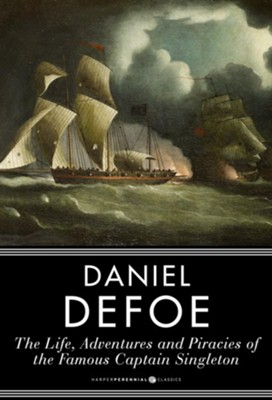 After being kidnapped from his family as a child, Bob Singleton is raised by the gypsy who purchased him. As a young man, he quickly takes to life at sea, and begins a series of adventures, both on and off land, eventually becoming a successful pirate known as Captain Singleton.

The Life, Adventures and Piracies of the Famous Captain Singleton is written much in the same style as author Daniel Defoe’s other famous novels, including Robinson Crusoe and Journal of the Plague Year, mixing accounts of adventure with well-researched economic and practical details that ground the story in the reality of its 18th century setting.

English author Daniel Defoe was at times a trader, political activist, criminal, spy and writer, and is considered to be one of England’s first journalists. A prolific writer, Defoe is known to have used at least 198 pen names over the course of a career in which he produced more than five hundred written works. Defoe is best-known for his novels detailing the adventures of the castaway Robinson Crusoe, which helped establish and popularize the novel in eighteenth century England. In addition to Robinson Crusoe, Defoe penned other famous works including Captain Singleton, A Journal of the Plague Year, Captain Jack, Moll Flanders and Roxana. Defoe died in 1731.

▼▲
I'm the author/artist and I want to review The Life Adventures and Piracies of the Famous Captain Singleton / Digital original - eBook.
Back
Back