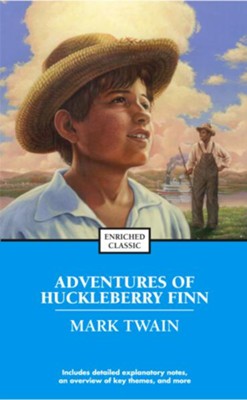 ▼▲
Enriched Classics offer readers accessible editions of great works of literature enhanced by helpful notes and commentary. Each book includes educational tools alongside the text, enabling students and readers alike to gain a deeper and more developed understanding of the writer and their work.

The Adventures of Huckleberry Finn follows Tom Sawyer’s best friend on his wildly entertaining exploits with runaway slave, Jim, recounted in vernacular English and vibrant descriptions of life along the Mississippi River. Set in a Southern antebellum society, which had ceased to exist at the time of its publication, The Adventures of Huckleberry Finn is often regarded as a scathing satire on the institution of racism and the attitudes that supported it. However, it is also a playful story about the joys and evils of childhood as well as the limitless possibilities it allows.

Enriched Classics enhance your engagement by introducing and explaining the historical and cultural significance of the work, the author’s personal history, and what impact this book had on subsequent scholarship. Each book includes discussion questions that help clarify and reinforce major themes and reading recommendations for further research.

▼▲
Mark Twain, born Samuel Langhorne Clemens in 1835, left school at age 12. His career encompassed such varied occupations as printer, Mississippi riverboat pilot, journalist, travel writer, and publisher, which furnished him with a wide knowledge of humanity and the perfect grasp of local customs and speech manifested in his writing. It wasn't until The Adventures of Huckleberry Finn (1885), that he was recognized by the literary establishment as one of the greatest writers America would ever produce.

Toward the end of his life, plagued by personal tragedy and financial failure, Twain grew more and more cynical and pessimistic. Though his fame continued to widen--Yale and Oxford awarded him honorary degrees--he spent his last years in gloom and desperation, but he lives on in American letters as "the Lincoln of our literature."

▼▲
I'm the author/artist and I want to review Adventures of Huckleberry Finn.
Back