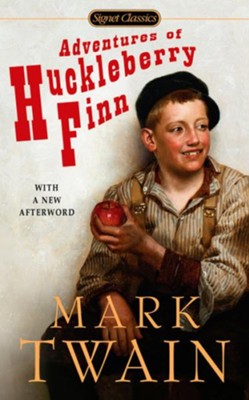 ▼▲
Rich in color and humor, this great novel follows the adventures of Huckleberry Finn and vividly recreates the world, the people, and the language that Mark Twain knew and loved from his own years on the frontier of the Mississippi.

He has no mother, his father is a brutal drunkard, and he sleeps in a hogshead. He’s Huck Finn, a homeless waif, a liar and thief on occasion, and a casual rebel against respectability. But on the day he encounters another fugitive from trouble, a runaway slave named Jim, he also finds—for the first time in his life—love, acceptance, and a sense of responsibility. And it is in the exciting and moving story of these two outcasts fleeing down the Mississippi on a raft that a wonderful metamorphosis occurs. The boy nobody wants becomes a courageous human being with a sense of his own destiny.

▼▲
Mark Twain was born Samuel Clemens in Florida, Missouri, in 1835, and died at Redding, Connecticut in 1910. In his person and in his pursuits, he was a man of extraordinary contrasts. Although he left school at twelve when his father died, he was eventually awarded honorary degrees from Yale University, the University of Missouri, and Oxford University. His career encompassed such varied occupations as printer, Mississippi riverboat pilot, journalist, travel writer, and publisher. He made fortunes from his writing but toward the end of his life he had to resort to lecture tours to pay his debts. He was hot-tempered, profane, and sentimental—and also pessimistic, cynical, and tortured by self-doubt. His nostalgia for the past helped produce some of his best books. He lives in American letters as a great artist, the writer whom William Dean Howells called "the Lincoln of our literature."

▼▲
I'm the author/artist and I want to review Adventures of Huckleberry Finn.
Back