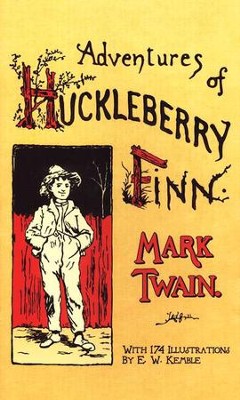 ▼▲
"You don't know about me, without you have read a book by the name of The Adventures of Tom Sawyer, but that ain't no matter." So begins, in characteristic fashion, one of the greatest American novels. Narrated by a poor, illiterate white boy living in America's deep South before the Civil War, Adventures of Huckleberry Finn is the story of Hucks escape from his brutal father and the relationship that grows between him and Jim, the slave who is fleeing from an even more brutal oppression. As they journey down the Mississippi their adventures address some of the most profound human conudrums: the prejudices of class, age, and colour are pitted against the qualities of hope, courage, and moral character. Enormously influential in the development of American literature, Huckleberry Finn remains a controversial novel at the centre of impassioned debate.

▼▲
Referring to Adventures of Huckleberry Finn, H. L. Mencken noted that his discovery of this classic American novel was "the most stupendous event of my whole life"; Ernest Hemingway declared that "all modern American literature stems from this one book," while T. S. Eliot called Huck "one of the permanent symbolic figures of fiction, not unworthy to take a place with Ulysses, Faust, Don Quixote, Don Juan, Hamlet."
The novel's preeminence derives from its wonderfully imaginative re-creation of boyhood adventures along the mighty Mississippi River, its inspired characterization, the author's remarkable ear for dialogue, and the book's understated development of serious underlying themes: "natural" man versus "civilized" society, the evils of slavery, the innate value and dignity of human beings, the stultifying effects of convention, and other topics. But most of all, Adventures of Huckleberry Finn is a wonderful story ― filled with high adventure and unforgettable characters (including the great river itself) ― that no one who has read it will ever forget.

▼▲
After the Civil War, Samuel Clemens (1835–1910) left his small town to seek work as a riverboat pilot. As Mark Twain, the Missouri native found his place in the world. Author, journalist, lecturer, wit, and sage, Twain created enduring works that have enlightened and amused readers of all ages for generations.

▼▲
I'm the author/artist and I want to review Adventures of Huckleberry Finn, Hardcover.
Back
Back